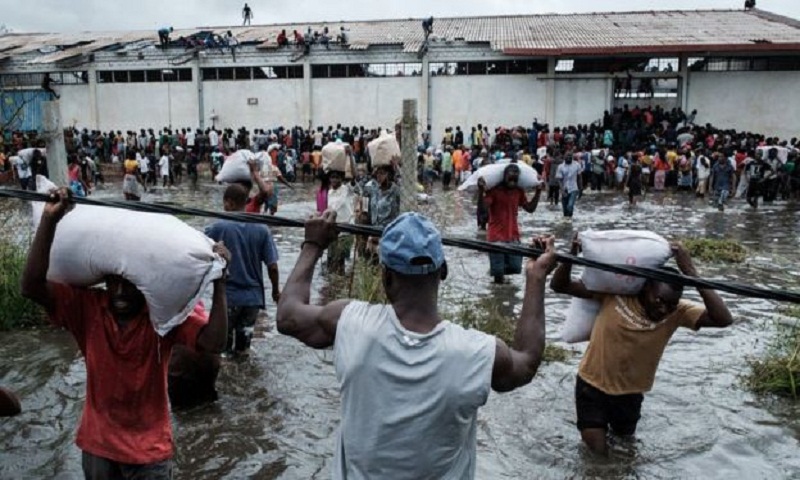 Aid agencies are scrambling to reach survivors of Cyclone Idai in Mozambique as the full scale of the disaster becomes clear.

Charities say thousands of people are stranded by catastrophic flooding, clinging to roofs or stuck in trees.

In the port city of Beira aid workers say they have only two to three days of clean water left.

About 300 people are confirmed dead in Mozambique and Zimbabwe, but the toll is expected to rise.

With shortages of food and clean drinking water the threat of disease is growing, medical agencies warn.

The powerful cyclone swept in to Beira last Thursday, with winds of more than 177 km/h (106 mph). It left a trail of devastation as it moved inland across Zimbabwe and Malawi.

Aid groups said Mozambique had borne the brunt of flooding from rivers that flow downstream from neighbouring countries. At least 200 people are confirmed dead in the country but many areas have still not been reached.

Caroline Haga, an official with the International Federation of Red Cross and Red Crescent Societies, said the worst-hit areas were close to the Buzi river west of Beira.

She said rescue teams were dropping high-energy biscuits, water purification tablets and other supplies to people surrounded by water and mud.

"We have thousands of people... in roofs and trees waiting for rescue," Ms Haga told AFP news agency.

"We are running out of time. People have been waiting for rescue for more than three days now. We can't pick up all the people so our priority are children, pregnant women, injured people."

Deborah Nguyen, of the World Food Programme (WFP), said the priorities were reaching people trapped in the flooded areas and then organising temporary shelter for those rescued.

Mozambique President Felipe Nyusi has said more than 100,000 people are at risk.

In Zimbabwe, at least 98 people have died and 217 people are missing in the east and south, the government said.

In Malawi, the UN says more than 80,000 people have been displaced by the cyclone.