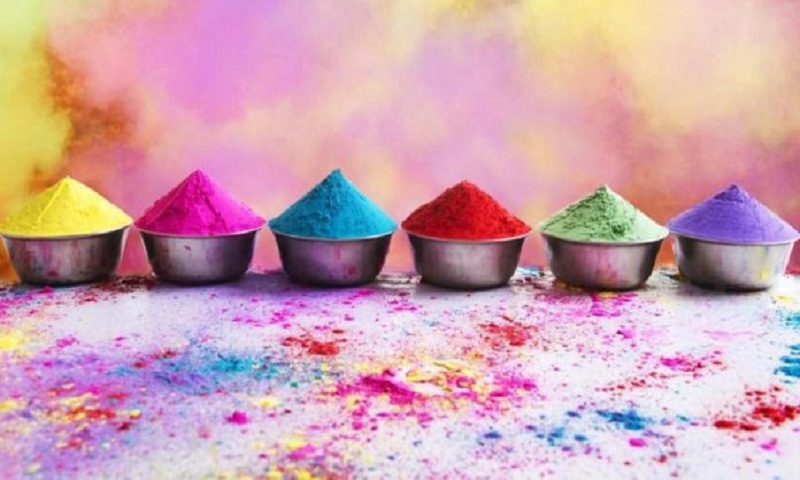 Holi, a Hindu religious festival of colours, is being celebrated across the country with due religious fervour and much enthusiasm, report BSS.

The festival signifies the victory of good over evil, the arrival of spring, end of winter, and for many a festive day to meet others, play and laugh, forget and forgive, and repair broken relationships, and is also celebrated as a thanksgiving for a good harvest.

The festival, also known as Dol Purnima (full moon day), will begin in the morning and continue till afternoon. It also usually lasts for two days starting on the Purnima in several parts of the country. As a ritual in celebration of the festival, the devotees visit the shrines, temples and offer colours (abir) at the feet of Idol of the God Sri Krishna and Goddess Sri Radhika.

Abir Khela, a significant part of the festival, means throwing of abir, a kind of perfumed and pink coloured powder and different other colorful powders by revelers on each other making festival-goers coated in colour to make the extravaganza enthusiastic.

“Religious songs in praise of lord Krishna will begin from 7am tomorrow at the Dhakeswari National Temple to mark the Holi festival followed by abir khela at 10am,” Advocate Taposh Kummar Paul told BSS adding that though the Dol Purnima begins today, it will continue till tomorrow.

In accordance with mythology, Dol Purnima, also known as Dol Jatra or Holi, is regarded as the festival of the believers of Boishnobism. Apart from Dhakeswari National Temple, Mahanagar Sarbajanin Puja Committee organized worshiping and Kirton (devotional songs) in the morning. Abir will be offered at the feet of idols of Radha Krishna and Chaitanyadeb. Devotees also offered the Abir to god and goddess.

Besides, the festival will be celebrated at different temples across the country, including capital Dhaka. Marking the festival, the surroundings of Dhakeswari Temple and Dhaka University campus usually wear a festive look as hundreds of youths irrespective of religions, castes and creeds celebrate the festival with different colors.

At Dhakeswari temple and Jagannath Hall, students will celebrate the festival colouring the fellow devotees and taking their photographs and selfies.

The festival has been introduced marking an auspicious day when Sri Krishna, Sri Radhika and their friends were playing with Abir at Brindaban in the ancient days. The festival is known as Dol Jatra in many states in India including West Bengal, Tamilnadu (Madras), Orissa and North, West and Middle regions of India.

Holi or Dol Jatra is also celebrated in neighbouring Nepal.