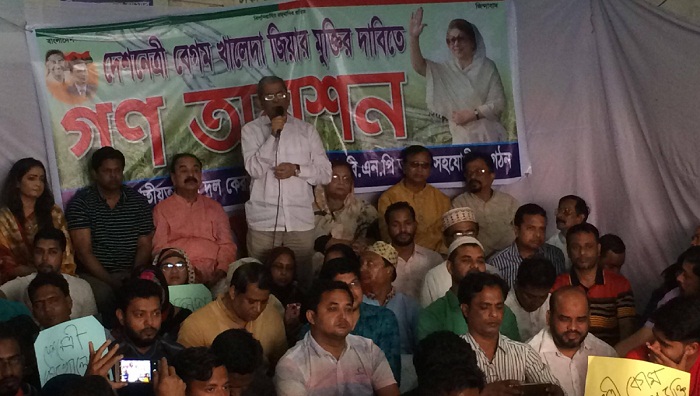 The BNP on Wednesday alleged that the government is pushing its chairperson Khaleda Zia towards death in a planned way as justice has disappeared from the country.

“I went to meet Khaleda Zia in court yesterday (Tuesday). I can’t summon words to make you understand her condition. I didn’t see her in such a state anytime in the past… she has been pushed towards death in a planned way,” said BNP secretary general Mirza Fakhrul Islam Alamgir.

Speaking at a token-hunger-strike programme, he further said, “You (govt) have created such a condition in the country where there’s no justice and fairness. Justice has disappeared from the country. This is unfortunate that from the highest court to the lower one is now functioning at the behest of the government.”

Fakhrul said their chairperson is so sick that she cannot hold her head straight while she is enduring serious pain in her whole body. “She neither can eat anything nor can keep any food in her stomach.”

He alleged that the court is not giving Khaleda Zia bail in many cases though other accused in those cases are out on bail.

Under the circumstances, the BNP leader said their party leaders and activists have no option to sit idle. “We must move forward with action programmes.”

He called upon the leaders and activists of BNP and its associate bodies in every upazila and district to take programme like token-hunger strike to mount pressure on the government to free Khaleda from jail.

Fakhrul alleged that the government is unwilling to release Khaleda from jail to prevent her from leading the nation in the movement for ‘restoration’ of democracy in the country.”

He said the government has been staying in power by using state power, guns, intimidating people, filing ‘false and fictitious’ cases against thousands of opposition leaders and activists and sending them to jail.

He urged the government to free Khaleda for the sake of democracy. “She’ll be able to protect you (govt) and democracy if you free her.”

Fakhrul also called upon the people of all walks of life to get united to build a democratic society by removing the current ‘fascist and autocratic’ regime.

BNP standing committee member Gayeshwar Chandra Roy said Khaleda is so sick that her life is now at stake. “She has to appear before the court with her falling health. But the court is not ensuring justice to her.”

He alleged that the Prime Minister has kept Khaleda in jail as she fears her for her immense popularity. “The Prime Minister will get relief the day she will hear the news of Khaleda Zia’s death sitting in Ganabhaban.”

Gayeshwar urged the BNP leaders and activists to get ready for making the highest sacrifice in the movement for freeing Khaleda Zia and restoring democracy.