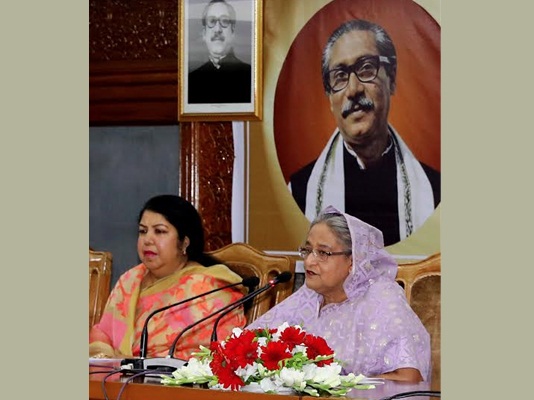 Prime Minister Sheikh Hasina  on Wednesday asked all concerned to take a pragmatic approach to reach the birth centenary celebration of Father of the Nation Bangabandhu Sheikh Mujibur Rahman at the grassroots so that the people can know the true history of the Liberation War.

She stressed the need for not limiting the celebration to only Dhaka and big cities of the country so the people could be imbued with the spirit of Liberation War and extend their hands in building Bangladesh as a respected country in the world.

There should be a realistic strategy on how the life and works of Bangabandhu would be projected to the next generation in a proper manner so that they can get encouragement to engage themselves in welfare of the nation, following Bangabandhu’s ideals, she mentioned.

The premier requested all concerned to concentrate on not making the birth centennial celebration of Bangabandhu a mere formality.

She also suggested involving all the pro-liberation parties, social and cultural organizations and all other bodies including educational institutes in the birth centenary celebration of Bangabandhu instead of limiting the event to among bureaucrats.

The meeting was convened to draw up elaborate programmes to celebrate the year-long birth centenary from March 17, 2020 to March 17, 2021.

Earlier on February 15, the government formed the 102-member National Committee for the Nationwide Celebration of the Birth Centenary of Bangabandhu.

Prime Minister Sheikh Hasina has been made the president of the committee, while PM’s former principal secretary Dr Kamal Abdul Naser Chowdhury is its member secretary.

In an apparent reference to BNP-Jamaat clique, the premier said that They have tried to erase the contribution of Father of the Nation Bangabandhu Sheikh Mujibur Rahman in Language Movement and the Liberation War as well.

People could not know Bangabandhu’s contribution for 21 years. But, truth can never be suppressed by anyone. Truth must come into light and takes its position and now we are getting the proof of it, she mentioned.

The premier reiterated her commitment to building a ‘Sonar Bangladesh’ freeing from hunger, poverty and illiteracy as dreamt by Father of the Nation Bangabandhu Sheikh Mujibur Rahman.

Bangabandhu has dedicated his whole life for the cause of the people as he deeply loved them. He wanted to see Bangladesh as a developed and prosperous nation where people would not be oppressed, intimidated and deprived.

Bangladesh is going ahead with the ideals of Father of the Nation to turn Bangabandhu’s dream into a reality, she said, adding that per capita income has already reached $1909 and the growth of GDP (Gross Domestic Product) is forecasted to cross 8 percent.

Highlighting the contribution of Father of the Nation, the prime minister said Bangabandhu had got just only three and a half years time and by this time, he rebuilt the war-ravaged country and shaped Bangladesh as an independent nation.

Bangabandhu had given the political liberty and taken initiatives for giving economic emancipation by taking all measures to turn a province into a country with giving a constitution to run it, she continued.

She said Bangladesh would successfully celebrate the birth centenary of Father of the Nation in 2020 and golden jubilee of the Independence in 2021.

The government has already declared 2020-2021 as ‘Mujib Barsha’, she went on saying.

Sheikh Hasina said the committees and sub-committees will be formed as per the recommendations of two committees formed for making Bangabandhu’s birth centenary celebration a success. National Professor Dr Anisuzzaman was present on the dais.