Bangladesh women remain positive ahead of SF with nemesis India 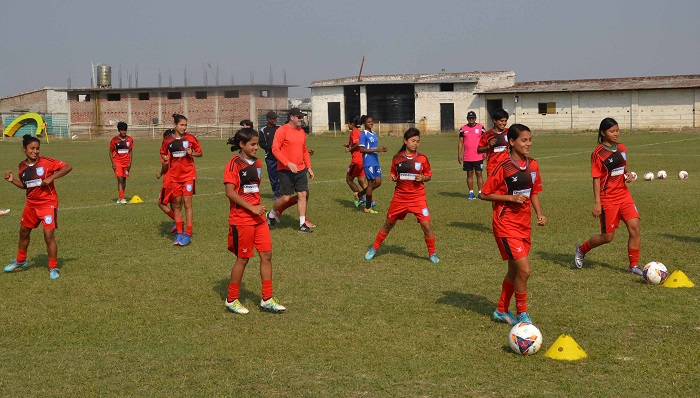 Runners up at the last edition Bangladesh are adopting a positive outlook ahead of their crucial semi-final clash of the six-nation SAFF Women’s Championship with four-time champions India at the Shahid Rangashala in the Nepalese city of Biratnagar on Wednesday.

The tournament’s 2nd semifinal between the two neighbouring nations will kick-off at 3:15 pm (Bangladesh time) while hosts Nepal will meet Sri Lanka in the first semifinal at 11:15 am on the same day at the same venue.

Ahead of the game, the Head Coach of Bangladesh team Golam Robbani Choton said, “Our preparation for the game with India is very good, players have fully recovered and recharged themselves and look positive ahead of the clash with India.”

Bangladesh captain Sabina Khatun meanwhile said, “We learnt some hard lessons against Nepal but we will be very positive in our match against India” India has never lost a match in the SAFF Women’s Championship since its inception in 2010.

Out of nine meetings, India beat Bangladesh on eight occasions and the other one ended in a goalless draw, in the group phase of the last edition. In that same tournament, they clinched the title for the 4th time in a row outplaying Bangladesh 3-1 in the final.

Bangladesh also suffered a humiliating 1-7 goals defeat against India in the Tokyo Olympics Qualifiers in November last year in Myanmar.

Bangladesh goalkeeper Rupna Chakma said, “We have recovered very well since our group game with Nepal. We are all looking forward to this game with real optimism.”

Indian Head Coach Maymul Rocky said, “For semifinal match of SAFF, both teams Bangladesh and India come here with preparation. We do not underestimate our opponent Bangladesh team, because they are also good team."

Ahead of the semifinal, Bangladesh team completed an array of dynamic stretching exercises, passing practices with some tactical patterns and concluded the session with the team rehearsing set plays both from a defending and attacking perspective, including penalty kicks on Tuesday afternoon.

Bangladesh team management was due to meet individually with some selected  players and the final team meeting will be held on Wednesday morning prior to the semifinal.

Bangladesh team have a good news that their talented forward Kristina Rani Sarkar, who missed the last two matches due to knee injury, will play in the semifinal against India.

Earlier, Bangladesh reached the last four stage of the meet as the Group A runners-up losing to hosts Nepal by 0-3 goals in their 2nd match after beating Bhutan by 2-0 goals in the first match while India stormed into semifinals as Group B champion with all-win record outplaying the Maldives by 6-0 goals and Sri Lanka by 5-0 goals.