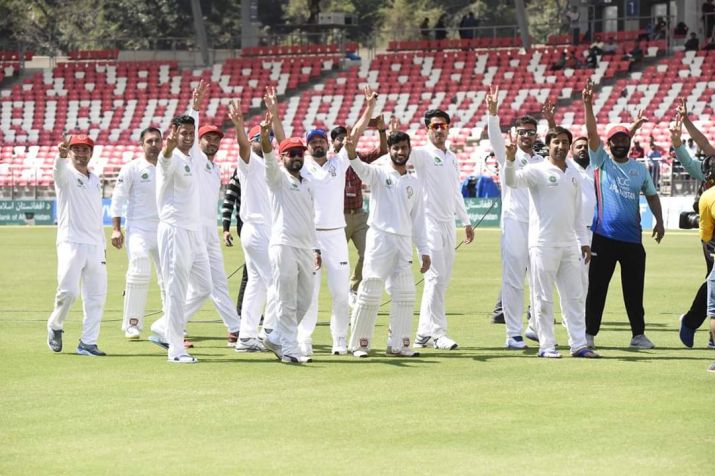 Afghanistan notched a historic maiden win in only its second test match when it defeated Ireland by seven wickets in the one-off test ending Monday.

Needing 118 runs, Rahmat Shah scored his second half century of the match and Ihsanullah Janat made 50 in his debut test as Afghanistan reached 149-3 just before lunch on the fourth day.

"It was our dream to play test cricket and today we won a test match so I am very happy for Afghanistan and its people," Afghanistan captain Asghar Afghan said.

"I want to give credit to the bowlers, especially Rashid Khan, Waqar (Salamkheil), Yamin (Ahmadzai) and (Mohammad) Nabi because the wicket was good for batting."

Leg spinner Rashid claimed the match haul of 7-102 and played the test match while nursing his injured spinning finger.

It was only the second test match for both countries since gaining test status in 2017. Afghanistan lost its inaugural test against India last year before Pakistan went on to beat Ireland.

Man-of-the-match Shah, who missed out on the century in the first innings before falling for 98, played another splendid knock of 76 with 13 fours before he got stumped when Afghanistan required only three runs for victory.

Janat was equally good in scoring an unbeaten 65 off 129 balls as both batsmen dominated Ireland bowling with attacking shots during their 139-run match-winning stand.

Ireland had an early opportunity to break the stand but Shah was dropped on 19 by Stuart Thompson in left-arm spinner George Dockrell's second over of the day after Afghanistan resumed on 29-1.

Although Mohammad Nabi missing Afghanistan's winning moment on the field when he got run out, Hashmatullah Shahidi got the winning runs when he pulled James Cameron-Dow to the square leg fence off his first delivery.

Ireland captain William Porterfield saw his team's first-innings effort of 172 as the prime reason for the defeat as Afghanistan replied strongly with 314.

"In any multi-day game, we had to capitalize on the first innings. If we'd done how we'd done in the second innings then, it could have been a completely different game," Porterfield said.

Ireland fought back in the second innings by scoring 288, thanks largely to the last-wicket half century stand between Cameron-Dow and Tim Murtagh that set up Afghanistan's target of 147 runs.

"Credit to Afghanistan, they outplayed us ... and once Afghanistan got past us in the first innings, it was always going to be hard," Porterfield said.