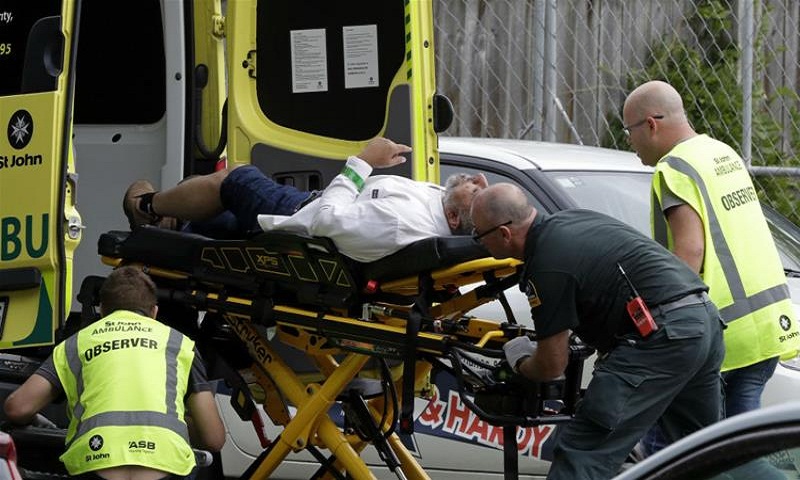 Forty people have been killed and several others injured in shootings at two mosques in New Zealand's city of Christchurch in an unprecedented attack in the quiet country in the Pacific.

New Zealand's Prime Minister Jacinda Ardern told a news conference that 20 people were in a serious condition after the "terrorist" attack.

Police Commissioner Mike Bush said four suspects, including a woman, were in custody.

Sam Clarke, a reporter with TVNZ, spoke with several people inside the Masjid Al Noor mosque when the shooting began. He told Al Jazeera a man entered with an automatic weapon and began firing.

"A gunman - dressed in black with a helmet carrying a machine gun - came into the back of the mosque and started firing into the people praying there," said Clarke.

Police confirmed a second shooting occurred at the Linwood mosque during Friday prayers in the South Island city, but no details were immediately available.

Ardern said: "This is, and will be, one of New Zealand's darkest days."

Authorities have not described the scale of Friday's shootings but urged people in central Christchurch to stay indoors. New Zealand media reported between nine and 27 people were killed, but the death toll could not be confirmed.

Police warned worshippers not to visit mosques "anywhere in New Zealand". A lockdown imposed throughout Christchurch was called off at about 05:00 GMT.

Australian Prime Minister Scott Morrison said one of the suspects was an Australian national, calling him an "extremist, right-wing, violent terrorist".

ESPN Cricinfo reporter Mohammed Isam said members of the Bangladesh cricket team, who are set to play a test match in Christchurch on Saturday, escaped from the mosque.

Mario Villavarayen, strength and conditioning coach of the Bangladesh cricket team, was quoted by the New Zealand Herald as saying the team was close to where the shooting occurred, but was safe.

"The players are shaken up but fine," Villavarayen was quoted as saying.

Muslims account for just one percent of New Zealand's population, a 2013 census showed.

"Many of those who would have been affected by this shooting may be migrants to New Zealand," Ardern said.

"They may even be refugees here. They have chosen to make New Zealand their home and it is their home ... they are us. The persons who perpetuated this violence against us ... have no place in New Zealand."

Mass shootings in New Zealand are exceedingly rare. The deadliest in modern history occurred in the small town of Aramoana in 1990, when gunman David Gray shot and killed 13 people following a dispute with a neighbour.