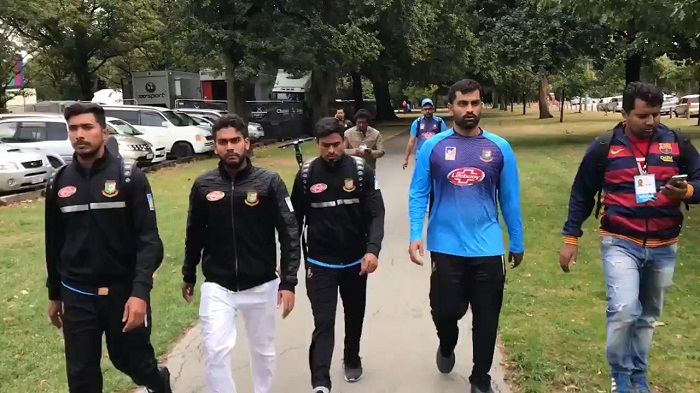 The third cricket test between the Black Caps and Bangladesh in Christchurch (New Zealand) has been called off after a shooting at a nearby mosque on Friday afternoon.

The shooting happened just minutes away from Hagley Oval, where the test was set to be held, and the Bangladesh cricket team narrowly avoided the incident, having to flee the scene.

The team had just arrived at the Al Noor Mosque for Friday prayer when a gunman opened fire, with video showing several Bangladeshi players and media escaping the scene.

New Zealand Cricket CEO David White confirmed that the third test has been called off as a result of the attack.

"On behalf of NZC - heartfelt condolences to those affected.

"We've cancelled the game. I've spoken to my counterpart at Bangladesh cricket - we agree it's inappropriate to play cricket at this time."

White said New Zealand Cricket were shocked and appalled by what had unfolded.

"Both teams are deeply affected.

"As a country we'll have to look at [security of visiting teams]. It seemed to be a safe haven. I'm sure all of New Zealand will take a look at their approach."

Mohammad Isam, a Bangladeshi journalist for Cricinfo who was on the scene, said that all the players are safe, but want to fly back to Bangladesh.

"When that was happening, one of the players had called me to contact the police. I'm new in Christchurch, I didn't know who to contact. I just got on someone's car and just we went near that place and it was very traumatic.

"It was very traumatic there and people were running out from that mosque presumably, and the Bangladesh players were coming out. They (the players) are in terrible and severe mental [distress], they're not feeling well.

"They were just outside the mosque about to get off from the bus and go into the mosque when they heard shooting and a lot of people running out and they saw someone wounded in front of them.

"And seeing that, they didn't get off the bus. About ten minutes later they ran out of the bus and ran through Hagley Park and into the Hagley Oval."

Bangladesh Cricket confirmed that all their team members are now safely back in the team hotel.

Bangladesh's strength and conditioning coach Mario Villavarayen said the players were shaken up.

"I spoke to one of them shortly after [the incident]. They didn't see anything but heard gunshots. They were at the ground [Hagley Oval] and just started running.

A member of the Black Caps staff told the Herald the team were having an optional training session at Lincoln, about 30 minutes away from Hagley Oval.

A Black Caps spokesman told the Herald nine of the team members live in Christchurch and are currently at home with their families.

The players have been told to stay indoors and a planned meeting at the team hotel was cancelled.

New Zealand Cricket have also been in contact with members of the Australian under-19 women's team, who are also in Christchurch.

According to a spokesman, the players from all the teams are safe and accounted for.

This is the first time a test held in New Zealand has been called off.

Two tests have previously been abandoned due to rain, while three tests overseas involving New Zealand have been cancelled due to terror attacks. The most recent was a bombing in Karachi in 2002, which saw the second of two tests against Pakistan cancelled before a ball could be bowled.

Herald rugby writer Christopher Reive is reporting the Super Rugby match between the Chiefs and Hurricanes in Hamilton will go on as planned 'for the time being'.