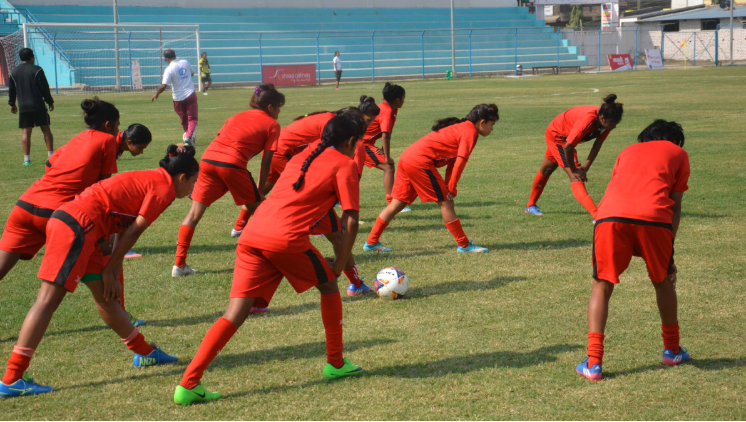 Bangladesh National Women’s Football team, now in  Nepal to compete in the SAFF Women’s Championship, will start their campaign in the six-nation regional soccer meet taking on Bhutan on Thursday (March 14) at Shahid Rangashala in Biratnagar with a hope to secure a semifinal berth beating the Himalayan country.

The match will kick off at 3:15 pm Bangladesh time.

Last time runners-up Bangladesh need just an outright victory against Bhutan to assure the semifinal berth from the group as hosts Nepal earned a comfortable 3-0 victory over Nepal in the tournament opener on Tuesday.

Bangladesh, placed in three–team Group A, will play their last group match against hosts Nepal on Saturday (March 16). Hosts Nepal topped the group list and were already in the upper hand beating Bhutan convincingly.

In the semifinals on March 20, Group A champions will play Group B runners-up at 11am while Group B champions will encounter Group A runners–up at 3pm at the same venue. The final match will take place at 3pm on March 22.

Ahead of the opening match against Bhutan, Bangladesh Women’s team made a light training session at the match venue on Wednesday morning. Bangladeshi players are very much excited ahead of the match and looking forward to their first target.

Bangladesh team travelled to Biratnagar on Tuesday afternoon after making training session in the morning to watch their game of interest and the opening match between hosts Nepal and Bhutan, where Nepal beat Bhutan by 3-0 goals.

Ahead of the first game, Bangladesh captain Sabina Khutan said, "We’ve adjusted very well with the local condition, surroundings and hotel foods. We understand our responsibilities as members of the Bangladesh National Team and look forward to our first game."

Earlier, Head Coach of Bangladesh Golam Robbani Choton said, “We’re focusing on winning our first game against Bhutan to achieve our target of reaching the semi-final.”

“We’re excited to represent Bangladesh here. We have been preparing to face Bhutan in our first game after returning from Myanmar,” he added.