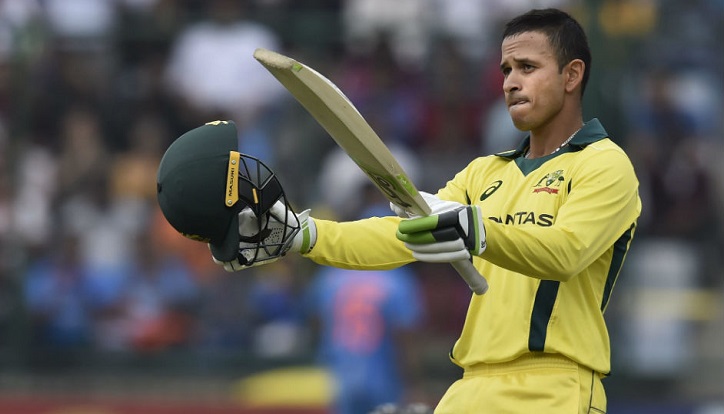 Opener Usman Khawaja struck his second century of the series to lead Australia to 272-9 in the winner-takes-all fifth one-day international against India on Wednesday.

The in-form Khawaja made 100 off 106 deliveries as Australia put up a competitive total after electing to bat first at Delhi's Feroz Shah Kotla ground.

Khawaja, who has been instrumental in Australia's turnaround after being 0-2 down in the series, built crucial partnerships including a 99-run second-wicket stand with Peter Handscomb, who made 52.

The left-handed batsman -- with scores of 50, 38, 104 and 91 in the previous matches -- paced his innings smoothly during his knock that was laced with 10 fours and two sixes.

Jadeja got the first breakthrough with his left-arm spin for the hosts after getting skipper Aaron Finch bowled for 27 in the 15th over.

The left-right batting pair of Khawaja and Handscomb then stood firm to lay the foundation of their team's total.

Khawaja got the second ton of his career with a single off Kuldeep Yadav as he waved the bat to an applauding Australian dressing room.

But he soon lost his wicket in the next over to Kumar with a drive to cover that was safely caught by skipper Virat Kohli.

Jadeja returned to get the dangerous Glenn Maxwell for one and Handscomb was caught behind off Shami as Australia slipped to 182-4.

The Aussies kept losing regular wickets but Jhye Richardson played a useful cameo of 29 off 21 deliveries before being run out on the final ball of the 50th over.