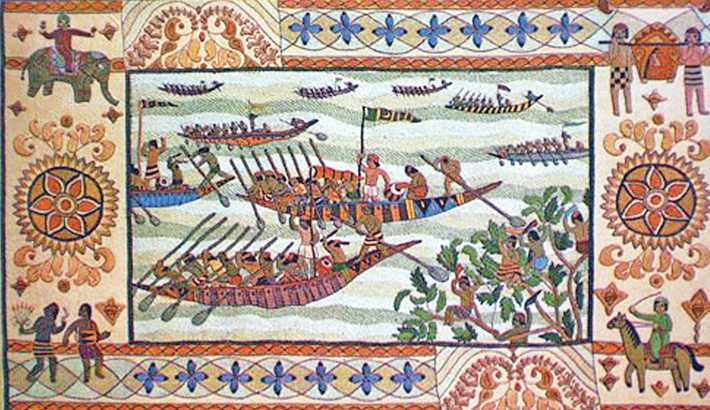 To encourage the traditional embroidered textiles, the government is going to set up a Nakshipalli at Jamalpur in a bid to provide all facilities to the Nakshi entrepreneurs, handloom and handicraft workers.

The Executive Committee of the National Economic Council (ECNEC) on Tuesday approved the Sheikh Hasina Nakshipalli at a cost of Tk 7.22 billion (722 crore) with ECNEC chairperson and Prime Minister Sheikh Hasina in the chair.

Bangladesh Handloom Board under the Ministry of Textiles and Jute will implement the project by December 2021, said Planning Minister MA Mannan while briefing the reporters after the meeting at the NEC Conference Room in the city’s Sher-e-Bangla Nagar.

The project aims to alleviate poverty and improve the living standards of the Nakshi and handloom workers of those areas side by side ensuring sustainable development of the Nakshi industry.

Planning Minister said that a total of six projects were approved at the ECNEC meeting involving an overall estimated cost of Tk 26.50 billion (2,650.75 crore). “The entire project cost will come from the state exchequer”. All the approved six projects are new projects.

He said that Nakshikathas have bright prospects in abroad and once the project is implemented, the handloom and Nakshi workers would be facilitated to a great extent.

Embroidery forms a big part of Bangladesh's traditional textile industry. . One notable product is 'Nokshi Kantha' or embroidered quilt, which has found a niche market within the urban middle and upper class people in recent years.

According to the Planning Commission, Nakshikatha is commonly known as the brand of Jamalpur and some 300 Nakshi entrepreneurs are producing their products in all upazilas in the district including Bakshiganj, Dewanganj, Madarganj, Islampur, Melandah and sadar upazilas.

Some 261 handloom families live in Jamalpur and Sherpur districts while there are also some 76 Nakshi entrepreneurs and 3,985 Nakshi artists in Sherpur.

Since the Nakshi and handloom workers in those areas are passing their days in difficulty like financial hardship, marketing problem and lack of patronisation, the ministry moved the project proposal and got ECNEC approval.