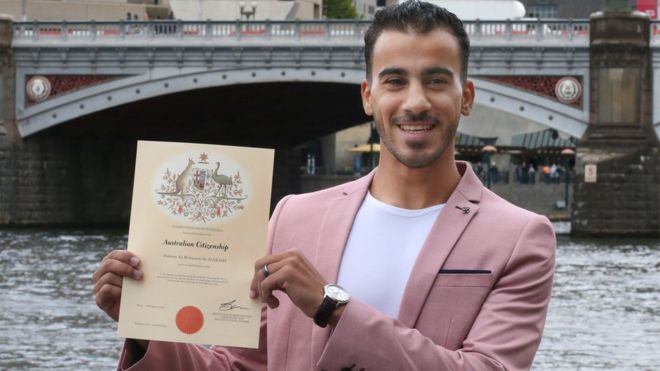 A refugee footballer whose detention in Thailand sparked a global outcry has become an Australian citizen after a ceremony in Melbourne.

Hakeem al-Araibi was accused by the Bahraini government of vandalising a police station during the Arab Spring uprising in 2011.

He fled Bahrain in 2014 and was granted political asylum in Australia but was arrested in Bangkok during his honeymoon and detained for two months.

He was released in February.

Al-Araibi was granted citizenship along with 200 other people on Tuesday after he successfully passed a citizenship test. The ceremony was attended by Australian Prime Minister Scott Morrison.

The footballer, who plays for the Melbourne team Pascoe Vale FC, was detained last year in Bangkok on an Interpol notice requested by Bahrain. He was released after international outcry and diplomatic pressure after 76 days in detention.