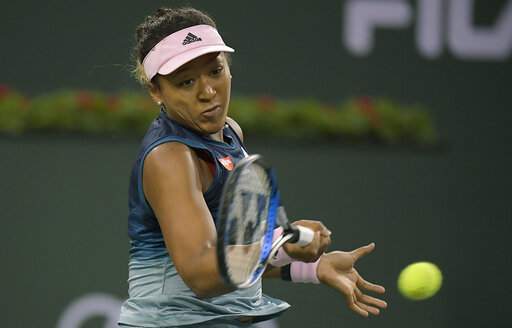 Naomi Osaka rolled past Danielle Collins 6-4, 6-2 in the third round of the BNP Paribas Open on Monday night, keeping the world's No. 1 player on track to defend her title.

Collins struggled with her serve throughout the match, committing seven double faults and connecting on just 47 percent of her first serves.

Osaka's first serve percentage was 66 and she won 70 percent of her first-serve points.

Osaka won her first career title at Indian Wells a year ago, propelling her to a career-best year in which she defeated Serena Williams for the U.S. Open title. She began this year winning the Australian Open and moving to the top of the rankings.

Venus Williams is turning back her own clock, moving into the fourth round with a 6-2, 7-5 victory over qualifier Christina McHale.

Williams is seeking her 50th career WTA Tour title in the desert, where she has never won the event. And at 38, she's showing vintage form.

"I don't really play that often, so when I do, I need to play well," she said. "It's extra motivation for me to play just a little bit better out there."

Serena, a two-time champion at Indian Wells, retired from her match on Sunday because of a viral illness.

Ranked 36th in the world, Williams endured three sets in her first two matches. She rallied past Andrea Petkovic in the opening round and followed up by outlasting No. 3 seed Petra Kvitova in a third-set tiebreaker.

Kvitova had made the finals in two of her first three tournaments this year.

Williams, who made the semifinals in the desert last year, was playing McHale for the first time. Williams rallied from early breaks down in both sets to win.

"I never played her, so it's also you're out there learning," Williams said.

On the men's side, No. 3 Alexander Zverev lost to German countryman Jan-Lennard Struff 6-3, 6-1.

Playing just his third tournament of the year, Zverev said he's been sick for a week.

"That hasn't changed, unfortunately," he said.