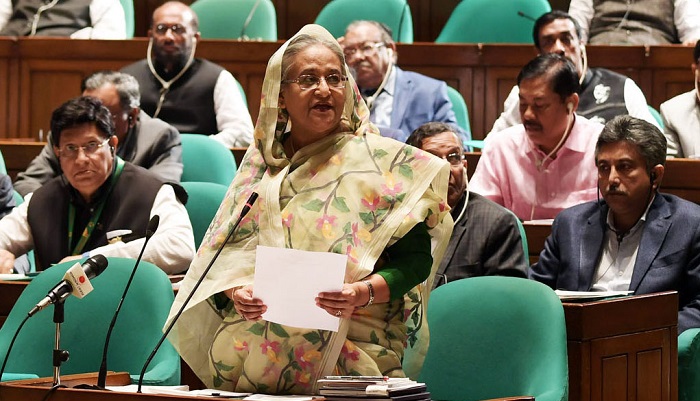 Prime Minister Sheikh Hasina on Monday reiterated her call to the Jayiya Oikya Front (JOF) MPs-elect to join parliament as she said the ruling party wants a strong opposition in real sense.

The Prime Minister said this in the House while participating in the general discussion on the President’s speech and delivering her winding-up speech, reports UNB.

“We want a strong opposition party in parliament, I hope those who got people’s votes will speak in Parliament and make comments on us whatever they want to,” Sheikh Hasina said.

She said one elected MP of the JOF (Sultan Mohammad Mansur Rahman) has already joined Parliament showing respect to voters. “Protecting the dignity of voters, he took his seat in the House.”

The Leader of the House said there were attempts to foil the election. “But people never paid their [spoilers] attention to that. Instead, they’ve exercised their voting rights and elected us,” she said.

Hasina also mentioned that it is the prime duty of the government to fulfill the pledges they have made to people before the election.

The Prime Minister firmly said the government will not allow any sort of conflict, terrorism, militancy, drug abuse and corruption in the country. “We’re taking stern actions against these menaces.”

“We’ve taken extensive programmes to eradicate terrorism, drug abuse, smuggling, women and children trafficking. Our drive against corruption is also going on,” she told the House.

Hasina said people voted Awami League to power to demonstrate their support to it due to the ongoing dives against terrorism, militancy, corruption and drugs.

“They’ve cast their votes against these social menaces and they’ve taken us into their confidence.”

The Prime Minister said the government is trying hard to eradicate corruption from the country although it is a tough job.

She mentioned that corruption heavily engulfed society during military regimes. “We’ve been able to control corruption significantly and that’s why development during our tenures is visible.”

The Prime Minister thanked all the political parties for participating in the 11th general election.

Talking about the recently-signed memorandum of understanding with Saudi Arabia over military cooperation, Hasina said members of the Bangladesh Armed Forces will never ever engage in any war joining hands with another country.

The Prime Minister also mentioned that there is no scope for any misunderstanding in this regard.

Later, the House passed the vote of thanks on the President’s speech by voice vote.