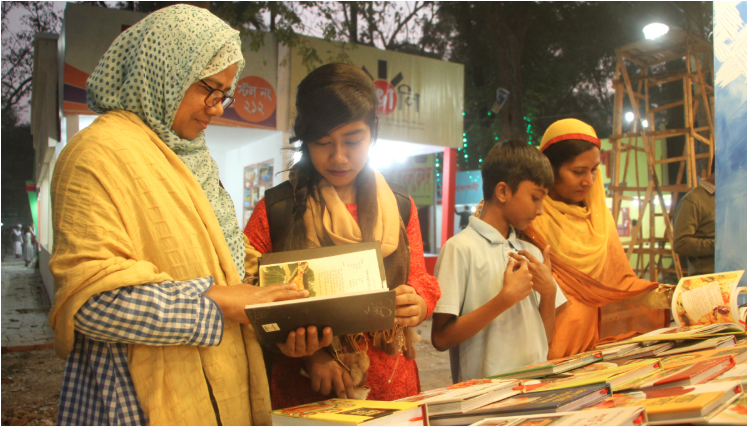 Bangladesh is widely recognised for hosting the world’s largest book fair, ‘Ekushey Boi Mela’, every year marking the International Mother Language Day. But the world knows little that the country also hosts over 40 more book fairs across the country throughout the year.

Book fairs, passionate book reading and giving books as gifts are gradually growing in Bangladesh, a country the literacy of which is still far below 80 percent, said experts.

They urged the private and public universities to focus on research and publications and join different book fairs to create quality readers in the country.

According to Bangladesh Gyan and Srijonshil Prokashak Samiti (BGSPS), over 40 book fairs are now being arranged across the country every year apart from the Ekushey one as the number of book buyers are gradually growing.

Besides, he said, BGSPS and different other organisations also hold nearly 30 book fairs in different districts round the year. “The number of book fairs is increasing gradually with people’s overwhelming response.”

Prof Anisuzzaman said it is encouraging that the number of readers and writers is increasing in the country.

“Ekushey Book Fair is witnessing an increasing number of booklovers every year. The sale of books is also increasing regularly. Many other book fairs are also being held in the country evoking a good response. It’s a very good sign that the number of readers and writers are on the rise,” he observed.

Prof Serajul Islam Choudhury said book fairs are working as means of campaign and publicity of books which is very necessary to create readers.

“It’s very positive that book fairs are getting popularity in the country. At the same time, we need more bookshops and libraries in all cities and district towns,” he observed.

The noted educationist said books on a wide range of issues and research-based ones are necessary alongside that of novels and stories to create quality readers. “Universities can play a good role in this regard. Every university should have good publications regularly. But our universities, both the private and public ones, don’t focus on the issue.”

Prof Syed Manzoorul Islam said it is a good sign that people are buying books and visiting different book fairs amid the huge popularity of Facebook and television channels.

“Books help people think positive, extend their areas of thinking and depth of their thoughts while superficial thoughts develop among people by watching light programmes of television and poor and reading rubbish content on the social media platforms,” he said.

The former DU Professor said children should be encouraged to read stories and novels apart from textbooks. “Children should be given books as gifts on various occasions, including on their birthdays, to inspire them to read books”.

The educationist also said though there are many quality publication houses in the country and printing business is extended significantly, the printing sector still did not get the recognition as an industry. “The government should do more for the development of the sector recognising it as an industry.”

Habibullah Sirazi said it is good news for the printing industry that the book fairs are gaining popularity in the country. “But the time has come for us to focus more on quality of books than quantity. “We must give our readers quality books with correct information and standard language. Producing quality books are necessary for building an educated nation.”