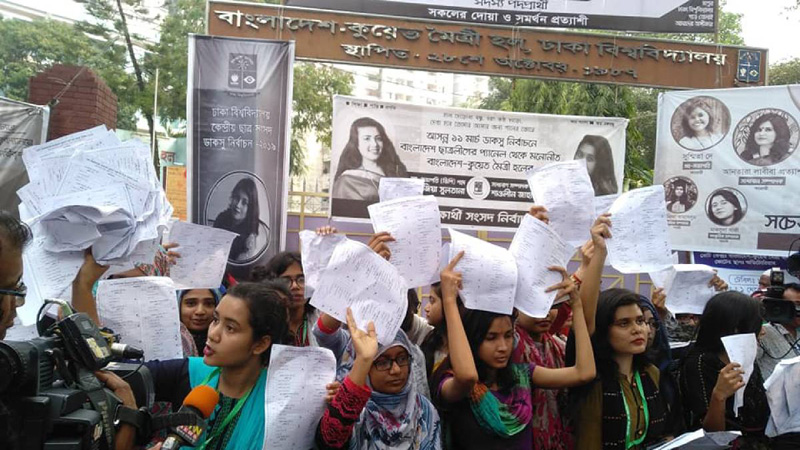 Voting for the Ducsu polls at Dhaka University's Bangladesh-Kuwait Maitree Hall has been suspended after allegation of stuffing ballot papers surfaced on Monday morning.

The suspension came one and a half hours after the elections to Dhaka University Central Students Union (Ducsu) began around 8:00am.

Earlier, scores of sealed ballot papers were allegedly recovered from a room of Bangladesh-Kuwait Maitree Hall of Dhaka University this morning.

The female students of the hall found the sealed ballot papers minutes after the much-awaited elections to Dhaka University Central Students' Union (Ducsu) began on Monday.

The authorities have suspended voting at the female hall while the students of the hall seized Dhaka University pro-vice chancellor’s car protesting the ballot-paper rigging.

The voting beings from 8am and continue till 2pm on the day at the 18 university halls.

A total 42,923 voters under the age of 30 from 18 Dhaka University (DU) halls will be eligible to cast their votes to elect representatives to 25 central positions and 13 hall union posts.

No outsiders will be allowed to enter the Dhaka University premises during the polling, the university sources confirmed.

The authorities have imposed restrictions on the number of media personnel on the Dhaka University campus during the Ducsu election.

According to the final list published by the chief returning officer's office, a total 229 candidates are contesting 25 central positions, including 21 for vice president, 14 for general secretary, and 13 for assistant general secretary.

In the hall union elections, a total 509 candidates are contesting 13 positions in each of the 18 halls.

The agitated students surrounded the pro-VC as he went to visit the hall.

DU Proctor Golam Rabbani told reporters that the allegation raised by the students was found to be true.

The students were seen showing some rigged ballot papers to the vice-chancellor, who was trying to settle the issue with them.

According to the claims, some ballot papers were stuffed in favour of Bangladesh Chhatra League nominated panel of Bangladesh-Kuwait Maitree Hall the night before.