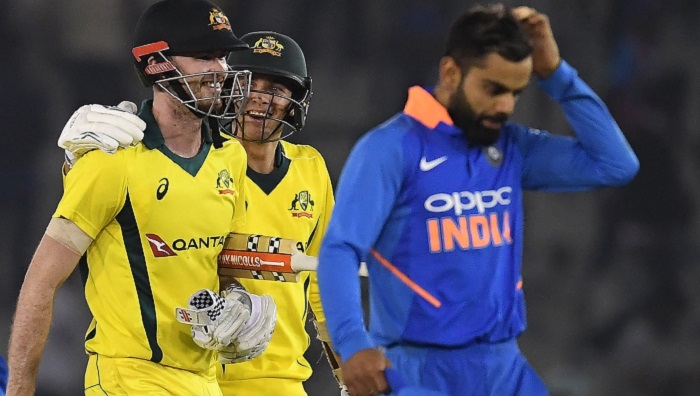 Peter Handscomb's maiden century and a blistering 84 from Ashton Turner helped Australia chase down a record 359 against India to level the series at 2-2 in the fourth one-day international on Sunday.

Turner's 43-ball blitz in Mohali gave Australia the win by four wickets with 13 balls to spare in their highest ever run chase, reports AFP.

The Baggy Greens' previous best was a race to 334 against England in 2011 in Sydney.

A 192-run second-wicket partnership between Handscomb, who smashed 117 off 105 balls, and Usman Khawaja, who made 91, was key to take the series into the final ODI in Delhi on Wednesday.

Turner, who made his debut in the opening ODI and playing just his second match, also built crucial partnerships including an 86-run stand with Alex Carey, who made 21.

The 26-year-old Turner, who replaced an injured Marcus Stoinis in the playing XI, hit 5 fours and 6 sixes to smash the bowlers to all parts of the ground.

"The plan was to take the game as deep as we could. Ashton playing his second game and playing a match-winning knock and Peter playing such a knock and Usman coming to form was wonderful," skipper Aaron Finch said after the win.

"We have seen him do that a lot in Big Bash. It was a world-class knock and to take on two of the best death bowlers in the world was outstanding," Finch added in praise of man of the match Turner.

Earlier Shikhar Dhawan struck a career-best 143 to guide India to 358 for nine after electing to bat first.

The hosts rode on a 193-run opening stand between Dhawan and Rohit Sharma, who made 95, to post a big total.

Australia were 12 for two in their chase after Bhuvneshwar Kumar bowled Finch for nought and fellow paceman Jasprit Bumrah got Shaun Marsh for six.

Bumrah took three wickets but the Indian spinners were at the receiving end of some attacking play in dew-laden conditions and sloppy fielding.

Rishabh Pant, doing the keeping duties in place of the rested Mahendra Singh Dhoni missed a chance to stump Turner on 38 and the innings also witnessed a few dropped catches.

"It became too wet to bowl, it was very difficult to bowl in the right areas. Crucial (about the stumping chance), we were sloppy in the field and should've grabbed our chances," said captain Virat Kohli.

"But Ashton (Turner) played one hell of a knock, Handscomb and Khawaja played well too but Ashton's innings was the game-changer."

Dhawan, who has been struggling to get big scores in recent times, struck form as he reached his fifty in 44 deliveries to take the attack to the opposition.

The right-left batting combination of Sharma and Dhawan mixed the right dose of caution and aggression to lay the foundation for India's big total.

Sharma registered his 40th ODI fifty but missed out on a hundred after falling to Jhye Richardson, who took three wickets.

Dhawan went on to register his 16th ODI ton and his first in 18 innings amid crowd cheers and a standing ovation from the Indian dressing room.

He surpassed his previous best of 137 in ODIs before being bowled by Cummins, striking 18 fours and three sixes in his 115-ball knock.