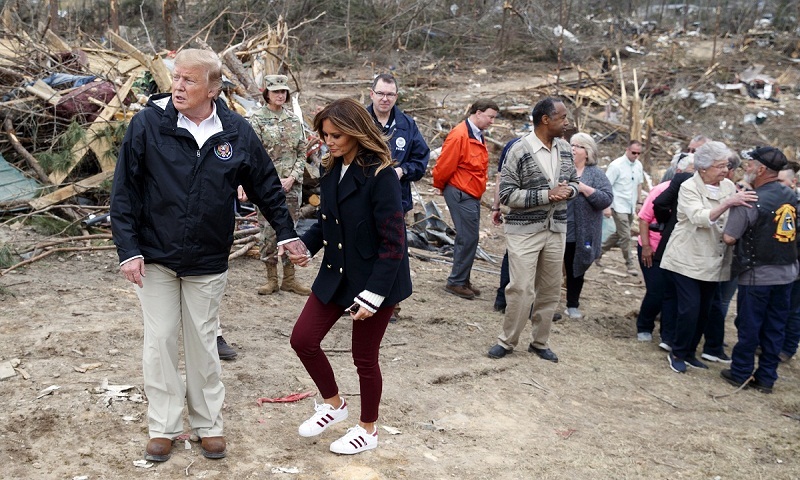 Donald Trump on Friday surveyed the devastation wrought by a powerful tornado that ripped through a rural Alabama town, uprooting trees, tearing homes from their foundations and killing nearly two dozen people.

"We saw things that you wouldn't believe," said Trump, overlooking a debris field strewn with branches and other wreckage in Beauregard, which bore the brunt of Sunday's storm. Mangled metal siding, wood planks, piping and electric wires lay strewn on the ground, along with remnants of everyday life: clothing, a sofa, a bottle of Lysol cleaner and a welcome mat encrusted with dirt.

Trump and the first lady spent the afternoon meeting with survivors, victims' families and volunteers trying to rebuild after the massive tornado carved a path of destruction nearly a mile wide, killing 23 people, including four children and a couple in their 80s, with ten victims belonging to a single extended family.

The day began with an aerial survey of the area by helicopter, which flew over swaths of land where trees had been flattened. Trump and his wife, Melania, also visited a church serving as a makeshift disaster relief center for survivors. He later observed a moment of silence before white wooden crosses commemorating each of the victims.

Earlier, Trump spent time with three families who lost loved ones, hearing their stories and dispensing hugs. He also met privately with survivors and family members, including a woman mourning the loss of 10 relatives.