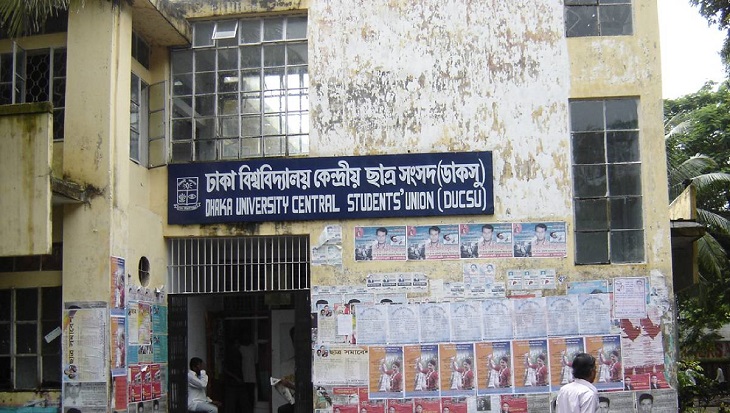 After a long wait, the Dhaka University Central Students Union (DUCSU) poll is going to be held on Monday, March the 11th.

The electioneering of the candidates from eight panels and the independent ones will end today.

The polls are slated for 8am to 2pm on Monday in which a total of 229 candidates are vying for 25 posts of the central students’ union.

In the hall union elections, a total of 509 candidates are contesting 13 positions in each of the 18 halls.

DU authority has already stepped up security measures to ensure free and fair polls after almost three decades, but is yet to fix the number of polling booths against a large number of voters.

However, the respective hall authority concerned will determine the total number of polling centres through discussion today, according to sources.

Each voter will have to cast a total of 38 votes on two separate ballots to elect 38 representatives.

There will be two ballot papers for the students to cast their votes, one for DUCSU position and another for hall union post.

A total of 42,923 voters from 18 dormitories [including male and female] of the university will get six hours to cast their ballots to elect representatives against 25 posts in DUCSU and 13 hall union posts.

Sources said a voter will not get more than three minutes to cast 38 votes.

Students will have to exercise their franchise putting cross (x) mark on the fixed box of ballot paper on the right side of the candidate name.

The voters have to collect ballot papers from their respective polling booths, showing identification card given by the hall authority.

The authority will make special arrangement for visually impaired students to cast their votes.

The university authority has finally fixed the voting time up to 2pm, ignoring the demand of different students’ bodies for extension of balloting period.

The authorities, however, said they will take votes from students even after the scheduled time of 2pm if the voters could manage to enter the polling centre with 2:00 pm.

On the day of election, all scheduled classes and examinations of Dhaka University will remain suspended. ‘Metal detector’ will be put up at the entrance of every polling centre.

Apart from this, vehicular movement will be restricted on the DU campus; except those vehicles that are carrying special pass from the authority concerned.

Only DU students will be able to use designated vehicles and outsiders have been asked to avoid DU areas till 10pm and use separate routes to commute on the day of polls.

Journalists will be allowed to enter the guestroom or designated spots of the voting centres using proper identification issued by the Chief Returning Officer (CRO).

However, live streaming or telecasting directly from the voting centres is prohibited. Moreover, the usage of all kinds of electronic devices including mobile phones is completely prohibited inside voting center.

Members of Dhaka University Journalist’s Association, and a limited number of representatives from the print and electronic media might be present at specific spots with passes issued by the DU authority.

On the occasion of International Women’s Day, Badrunnesa Ahmed trust on Friday awarded five noted women of the country for their outstanding contribution to women empowerment.

National Prof Dr Anisuzzaman handed over the prize to the winners as the chief guest at the auditorium of International Mother Language Institute in the capital.