Women better off today, but still lag far behind 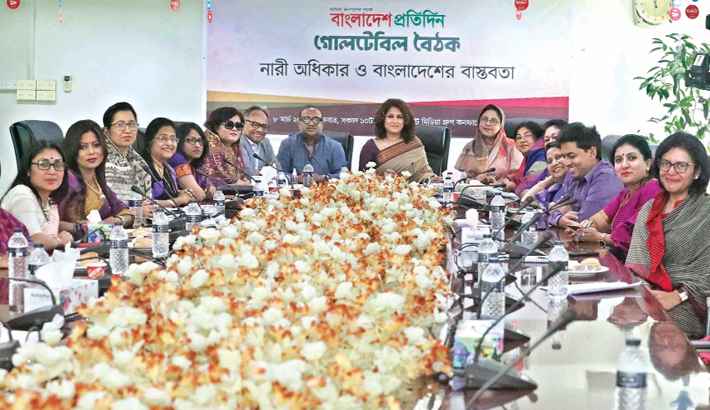 Guests and participants at a roundtable discussion at the conference room of East West Media Group (EWMGL) in the capital's Bashundhara Residential area on Friday on the occasion of the International Women’s Day. Vernacular daily Bangladesh Pratidin arranged the event. —SUN photo

Women should target acquiring higher education as a key tool to empower themselves in the society, speakers told a roundtable.

They also called for changing men's attitude towards women and proactive actions by the stakeholders to uphold women's dignity and rights.

Vernacular daily Bangladesh Pratidin arranged the roundtable at the conference room of East West Media Group (EWMGL) in the capital's Bashundhara Residential area on Friday on the occasion of the International Women’s Day.

Former State Minister Meher Afroz Chumki said the women have proven their excellence in leadership position in different areas as the political parties have empowered them in the last one decade.

Former lawmaker Nilufar Chowdhury Moni disagreed with the progress of women in political arena as the political parties are far away, according to her, to ensure one third of female participation in all committees as of election commission direction.

Lawyer Turin Afroz said the women are yet to remain unpaid as they contribute at home as well as at workplaces.

“We have to develop our daughters from family as they get confident on own vision from early girlhood. Family members and nearer ones have significant responsibilities towards a girl’s journey towards success,” Farida added.

Bangladesh Pratidin Executive Editor Peer Habibur Rahman appreciated the leadership of Bangladeshi women in field of politics. He also suggested women politician to be more sincere about norms and activities at the parliament.