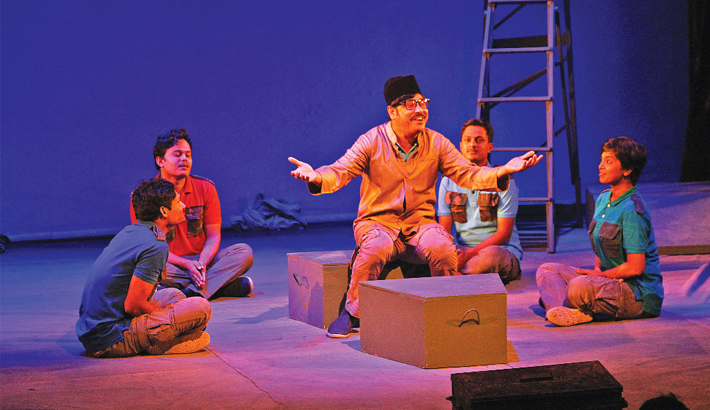 Country’s popular theater troupe BotTala staged the 42nd show of its acclaimed theatrical production ‘Crutch-er Colonel’ at the central auditorium of Shahjalal University of Science and Technology (SUST) in Sylhet yesterday at 6pm.

The theatre troupe went to the university to join the celebration of 20 years of DIK Theatre.

The play ‘Crutch-er Colonel’ is an adaptation of eminent writer Shahaduzzaman’s novel in the same title. It has been adapted jointly by Amina Luthfa and Soummo Sarker. The play was directed by Mohammad Ali Haider

‘Crutch er Coloner’ is based on the life of freedom fighter and leftist politician Colonel Taher who was one of the masterminds of the coup of November 07, 1975 and was executed in 1976. Colonel Taher, who was a high-achieving officer of the Pakistan army, joined the Liberation War and was appointed the Sector Commander for Sector 11. He lost his leg from a mine blast during a debriefing.

After liberation war, he joined Bangladesh Army and later got himself involved with Jatiyo Samajtantrik Dal. He had a direct role in the coup that resulted in General Ziaur Rahman coming to power. After taking charge, Ziaur Rahman tried him in a military tribunal for high treason and murder inside the Dhaka Central Jail and Taher was executed on July 21, 1976. After more than three and a half decades, High Court declared in 2011 that the verdict of the military tribunal and the execution were illegal.