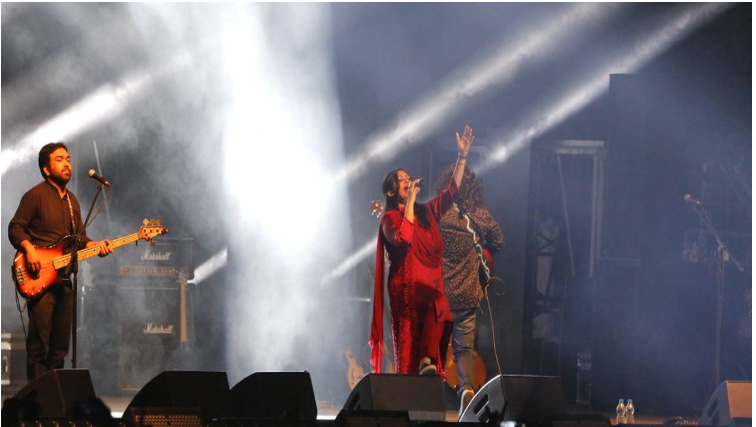 An evening of thumping bass, soaring solos, flashy rhythmic lights, surrounded by thousands of young faces, all in sync with the songs that touch every Bangladeshi’s soul, performed by the top names of the country’s band music scene.

Come to think of it, what could work better to capture the spirit of March 7 than the inherently rebellious, almost subversive ethos of a rock concert?

But the electric performances and the wild youths are just a part of the gathering titled Joy Bangla Concert 2019, an endeavour of the Centre for Research and Information (CRI), the Awami League’s think-tank, and Young Bangla, a youth-centred initiative of the government.

The fifth edition of the concert  was held Thursday at the Army Stadium with a view to spreading the spirit of independence and the lessons of Bangabandhu among the youth of the country.

This year’s liner-up brought together the top shelf of Bangla bands. Bay of Bengal, Chirkutt, Shunno, Lalon, Nemesis, Arbovirus, Cryptic Fate, and Artcell, each taking the glimmering stage one after another. Besides their usual setlist, each act also included a rendition of a song from the legendary Shwadhin Bangla Betar Kendro’s famed back-catalogue, our ‘Songs of Freedom’.

Despite the throbbing performances, pride of place of course went to the playback of the all-important speech that marked this day in 1971, recently restored to a colour version. And interspersed with them were promotional videos of several government-initiated welfare projects.

Upon entering the venue, UNB correspondent found it full to the brim with audience scattered around the gallery and the outfield. Many of them were sitting in small circles all with sweaty but glowing faces cheerful about the roaring music.

Most of the attendees UNB spoke to were of the view that through such events the young generation can connect more with the true spirit of the Liberation War. Some complained about the long queues to get in.

"We had to wait for a long time before entering the field. Once we were past the gate, the exciting atmosphere took over the tiredness," said Shaila, a student of Green University.

As time progressed, the audience kept growing, and by the end people of almost all classes and age groups filled the venue.

Wahid Rahman, a service holder along with his minor boy was found sitting in the eastern gallery.  "I feel that in a way I am instilling the spirit of Liberation War in my child by introducing him to freedom-loving youth of ours," he said.

As the line up kept reaching down, from Shunno to Bay of Bengal; then Arbovirus, Cryptic Fate and Nemesis; lastly bringing Lalon and Chirkutt together. Finally leaving the crowd for Artcell.

Evening made way for a night where smartphones became stars among the crowd all connecting to the common theme: Bangabandhu's cry for independence and its commemoration.

If the spectacle of the fifth Joy Bangla Concert is anything to go by, most attendees would already be looking forward to the next one.