Government to be forced to free Khaleda: Fakhrul 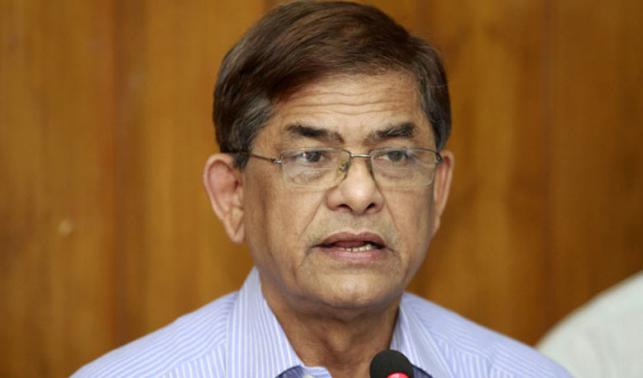 BNP secretary general Mirza Fakhrul Islam Alamgir on Wednesday said their party will force the government through an unstoppable street agitation to free their chairperson Khaleda Zia from jail.

Speaking at a human chain programme, he also alleged that the government is not willing to ensure proper treatment of Khaleda at any specialised private hospital out of political vengeance.

“There’s no alternative to freeing Khaleda Zia for restoring democracy. Time has come for us to strengthen our organisation and forge a strong unity of people. We’ll force the government to free our leader through waging an unstoppable movement,” Fakhrul said.

BNP leaders and activists formed the human chain in front of the Jatiya Press Club demanding the release Khaleda from jail and her proper treatment.

Stating that Khaleda is very sick, Fakhrul said availing of treatment is her basic and constitutional right. “But she has been deprived of it. We’ve long been demanding she be provided treatment at any specialised hospital, but the government is not paying heed to it out of fear.”

He also said it seems the government thinks it will ‘lose power’ if the BNP chairperson is allowed to receive treatment at any specialised hospital. “They’ve kept her in jail only because of their political vengeance.”

Amid the party’s worry over Khaleda’s illness, a BNP delegation, led by Fakhrul, met Home Minister Asaduzzaman Khan on Tuesday at his Secretariat office and got assurance from him that every necessary step will be taken for ensuring Khaleda’s proper treatment.

At their human chain programme, the BNP leaders apparently opposed the government’s decision as they want Khaleda to be taken to any private hospital like United Hospital.

Fakhrul alleged that the current ‘illegal regime’ has kept the BNP chief in jail for over a year on political ground by convicting her in ‘false’ cases. “All the cases she has been facing are bailable ones, and all other accused in those cases have been granted bail. But she has been kept in jail by implicating her in cases after cases for her efforts to restore democracy in the country.”

He said nearly 98,000 cases were filed against around 25 lakh democracy-loving people as part of the government’s efforts to hang onto power ‘illegally’ and cement ‘one-party’ rule.

He said their party turned down the results of the 11th parliamentary election as they think it was not any election at all. “The country’s people and the global community know voters could not cast their votes in the last election as there was a vote robbery the night before the voting.”

The BNP leader said people did not go to polling stations during the recent city polls as they lost their confidence in the government and the Election Commission.

He renewed their party’s demand for a fresh national election under neutral government and Election Commission.

Several hundred leaders and followers of the party formed the human chain in around 12:15 pm which ended around 1:30 pm.

BNP Chairperson Khaleda Zia has been in jail since a special court convicted her in Zia Orphanage Trust graft case on February 8 last year.