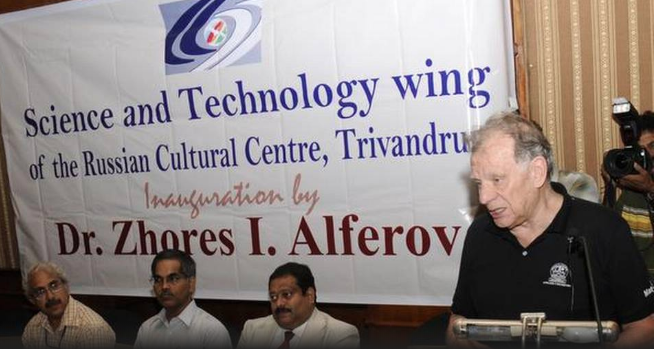 Zhores Alferov, the 2000 Nobel prize winner in physics and a member of Russia's parliament, has died aged 88 in St Petersburg, the Russian Communist party said on Saturday.

Alferov shared the nearly $1 million award, which recognised his research work in the 1970s in information technology which paved the way for computers, CD players and mobile telephones, with two U.S. scientists Herbert Kroemer and Jack Kilby.

A staunch believer in communism, Alferov was born in 1930 in Belarus, then part of the Soviet Union. He was a member of the party faction in the Duma, Russia's lower house of parliament.

His work won him many scientific awards and he was an honorary member of research institutions including the American National Academy of Sciences.

He was the first Russian to win a Nobel Prize since Soviet leader Mikhail Gorbachev won the peace prize in 1990.

Alferov was named after a French socialist, Jean Jaurs, while his older brother was named Marx after Karl Marx, a German philosopher and socialist revolutionary. Marx Alferov was killed during World War Two.

In his Nobel Prize acceptance speech, Alferov noted that physics had brought both benefits and disasters to mankind in the 20th century and warned that the mass media could be abused in the wrong hands.

“Knowledge is power, but power must be based on knowledge,” he said.