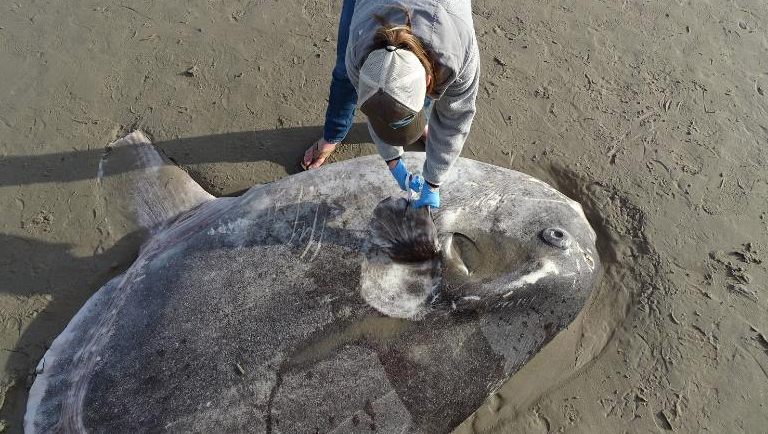 The seven-foot fish washed up at UC Santa Barbara's Coal Oil Point Reserve in Southern California last week. Researchers first thought it was a similar and more common species of sunfish -- until someone posted photos on a nature site and experts weighed in.

What transpired after that surprised researchers from California to Australia and New Zealand. It turned out to be a species never seen before in North America. It's called the hoodwinker sunfish.

"When the clear pictures came through, I thought there was no doubt. This is totally a hoodwinker," said Marianne Nyegaard, a marine scientist who discovered the species in 2017. "I couldn't believe it. I nearly fell out of my chair."

An intern at Coal Oil Point Reserve alerted conservation specialist Jessica Nielsen to the dead beached sunfish on February 19. When Nielsen first saw it, the unusual features of the fish caught her eye.

"This is certainly the most remarkable organism I have seen wash up on the beach in my four years at the reserve," Nielsen said in a UC Santa Barbara press release.

She posted some photos of the fish on the reserve's Facebook page. When colleague Thomas Turner saw the photos later that day, he rushed to the beach with his wife and young son.

Turner, an evolutionary biologist who is six feet tall, stretched out his arms to show the scale of the seven-foot-long fish. He snapped some photos of what he thought was an ocean sunfish, a rare sight up-close, he said.

"It's the most unusual fish you've ever seen," said the UC Santa Barbara associate professor. "It has no tail. All of its teeth are fused, so it doesn't have any teeth. It's just got this big round opening for a mouth."