Venezuela crisis: How much aid is getting in? 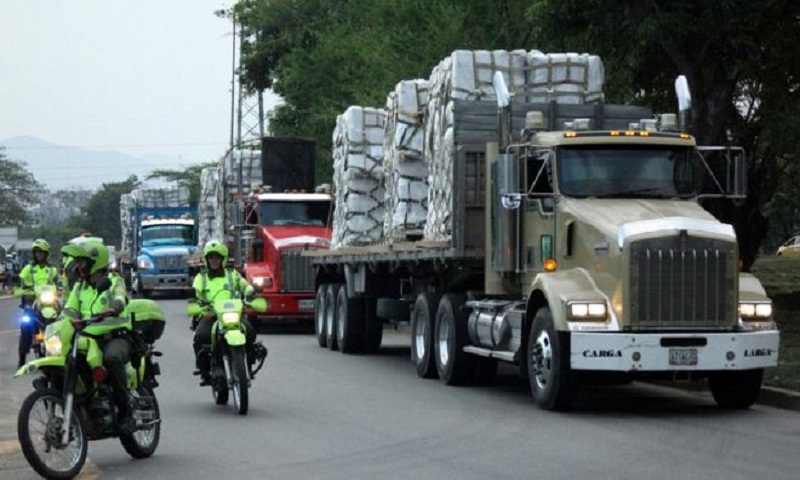 The Venezuelan government has denied entry at its borders to hundreds of tonnes of humanitarian aid.

Lorries containing supplies from the United States, Brazil and Colombia were turned away.

The US, which supports the Venezuelan opposition leader Juan Guaidó, says it's offering to provide $20m (£15m) of humanitarian supplies.

But despite the recent stand-off, not all international assistance has been rejected.

The Venezuelan government has praised Russia, an ally of president Nicolás Maduro, for sending aid and said 300 tonnes of it had been transported to Venezuela.

There are also a number of international humanitarian organisations working inside the country.

BBC Reality Check looks at what aid is getting in and how it's used.

President Maduro denies there's a humanitarian crisis and says the US-led relief effort is part of a plan to remove his government.

The aid, including food, hygiene and medical kits, was requested by Mr Guaidó, who declared himself interim president last month.

Last week, Mr Maduro announced that Russia was sending 300 tonnes of food and medical supplies to Venezuela, which would arrive on 20 February.

But in response to questions from BBC News, the Venezuelan government provided no further details about the contents of the aid shipment and said there were currently no opportunities to film it.

Kremlin spokesman Dmitry Peskov was asked about the shipment in a daily press call on 21 February and replied that he didn't have any information but would make inquiries.

BBC News also asked the Russian government for information about the status of this aid package but received no reply.

However, the Pan-American Health Organisation, which works with the World Health Organization (WHO) did release information about medical supplies sent by Russia. A shipment of 7.5 tonnes arrived on 21 February.

A similar delivery was made in April 2018.

The WHO oversaw the delivery of a total of 50 tonnes of medicines and supplies last year from foreign countries.

What humanitarian aid work is going on?

The country lacks 85% of medicines it needs, according to the Pharmaceutical Federation of Venezuela.

The agencies to have received the most money earmarked for Venezuela include the WHO, the United Nations Children's Fund and the Norwegian Refugee Council.

And this includes about $9m (£6.8m) raised through the UN's central emergency response fund for projects to improve nutrition, overseen by international agencies including UNHCR, the UN refugee agency, and the WHO.

So far this year, another $15m has been donated, according to the UN database.

Since November, UN agencies had been scaling up existing activities to meet "urgent health, nutrition and protection needs", a representative of the UN's Office for the Co-ordination for Humanitarian Assistance (UNOCHA) said. And about the half the money needed to fund this had been raised so far.

The European Commission (EC) was the largest donor to organisations working inside Venezuela in 2018, according to the database.

It has been sending humanitarian aid to Venezuela since 2016.

The EC focuses on projects to improve access to food and nutrition, water, hygiene and sanitation for people in Venezuela.

Last June, it announced a €35m (£30m) package that included emergency humanitarian relief for people inside the country, measures to protect people displaced in neighbouring countries and development assistance.

That was followed in December by a €20m emergency relief package and an additional €5m plan was announced this year.