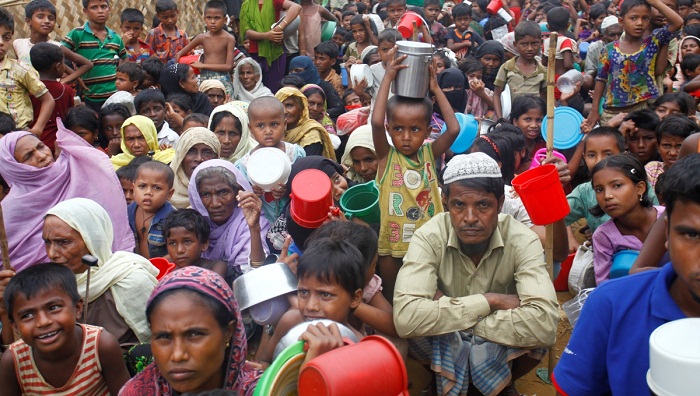 Philippines President Rodrigo Duterte has offered Filipino citizenship to the Rohingyas as he reiterated his willingness to accept them in his country.

“I’m willing to accept Rohingyas,” GMA News quoted him as saying in his speech before a convention of the League of Municipalities of the Philippines at the Manila Hotel.

In April last year, Duterte said the Philippines was willing to provide sanctuary for Rohingya fleeing what he called "genocide” in Myanmar, a remark that prompted a Myanmar government spokesman to respond that the President had no restraint and knew nothing about their country.

The President then issued a public apology to Myanmar’s de facto leader Aung San Suu Kyi for saying genocide was taking place in her country and clarified that he was hitting out at European countries which had accused Myanmar of human rights violations, but did little to help the Rohingya, according to the online portal of a major commercial broadcast company of the Philippines.

Hundreds of thousands of people, mostly Rohingya, a Muslim ethnic minority group, have fled Myanmar into Bangladesh in groups since August 2017 when Rohingya militant attacks on security forces sparked a military crackdown.

The UN and several Western countries have accused Myanmar of ethnic cleansing, which Myanmar denies.

Former presidential spokesperson Harry Roque said last year that the Philippines had facilities that could accommodate refugees, citing a processing center in Bataan.

Roque added that the Philippine government had an "open-door policy" for refugees.

In 1975, the Philippines government accommodated thousands of Vietnamese refugees who fled their country after the Vietnam War ended.

The facility Roque cited, the Philippine Refugee Processing Center (PRPC), hosted many of them.

The Philippines under then-President Manuel Quezon gave refuge to Jews escaping the Holocaust in the late 1930s.