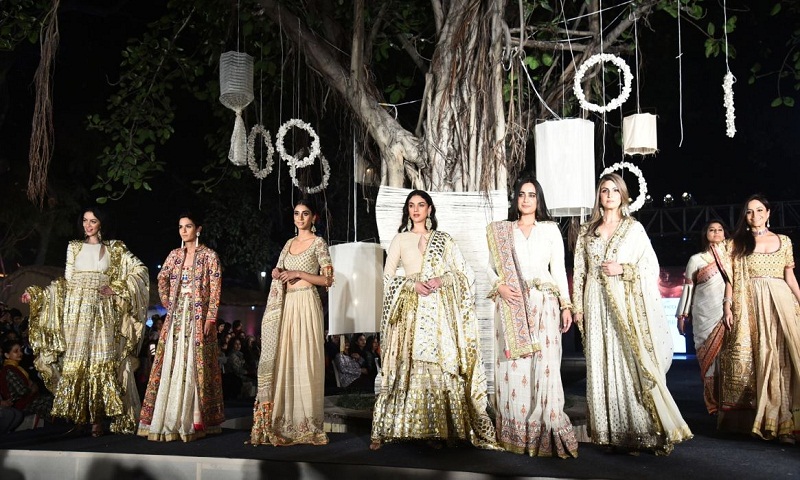 Fashion designers such as Rohit Bal, Rajesh Pratap Singh, and Rina Dhaka along with Bollywood actors Arjun Rampal and Aditi Rao Hydari celebrated the centennial of Khadi and presented the fabric as a style statement on the runway here on Thursday, report The Statesman.

Kashmir born designer Rohit Bal showcased a pastel collection, which included sarees and lehengas made from Khadi. Bollywood actor Arjun Rampal, who looked dapper in a black sherwani with an embroidered shawl, walked the runway as his showstopper.

Bal described Khadi as the “fabric of the soul.”

“It’s the national fabric of our country. It stands for freedom, independence and self-discovery. It’s the fabric of now, before and the future,” Bal told IANS.

Next on the runway was Rina Dhaka, who not only showcased a collection made out of Khadi, but also paid a tribute to the martyrs of the Pulwama attack, which took place on February 14.

Her white and beige collection had “Jai Jawaan” written on them.

An emotional Dhaka said: “The message is my way of expressing the current scene… For me it is very important. In my way I am also trying to tell with this story my message to have gratitude for our soldiers.”

Asked about Khadi and its popularity, the designer told IANS: “Khadi is the fabric of a journey. It is a warp and weft of life…no one else has the Khadi story, only we have it.”

Rajesh Pratap Singh was up next. He presented a wide array of dhotis, pants, shirts and sherwanis in plain white.

Bollywood actress Aditi Rao Hydari concluded the show as she sauntered the runway in a white and gold lehenga for the label Abu Jani and Sandeep Khosla.

FLO President Pinky Reddy talked to IANS about the importance of Khadi, which is also called the fabric of freedom.

“Our Prime Minister (Narendra Modi) has done a lot for Khadi and I feel we have to encourage what was started by Gandhiji. Khadi has become an international name and we should not forget it,” Reddy said.

The “Khadi Goes Global” event also saw a dance performance titled “An Ode To Mahatma” by Geeta Chadran and Sandhya Raman. It also honoured promoters and producers of Khadi such as Bal, Pratap Singh, Chaman Siju and Rta Kapoor Chishti, among others.