If you have a dream, fight for it: Lady Gaga 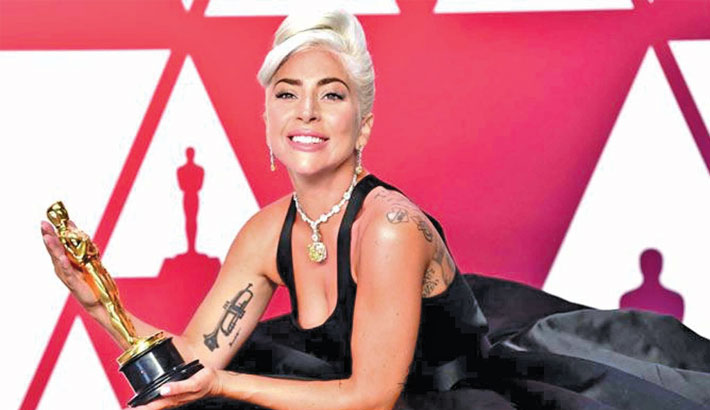 Singer-actress Lady Gaga took home her first Oscar in the Best Original Song category for Shallow -- the popular track from the hit film, A Star Is Born.

The award went to Gaga and co-writers Mark Ronson, Andrew Wyatt and Anthony Rossomando. In her speech, she thanked her director and co-star Bradley Cooper, for "believing in us". "Bradley: there's not a single person on the planet that could have sung this song with me but you," said Gaga, who got emotional after the win.

"Thank you for believing in us. And if you are at home and you're sitting on your couch, and you are watching this right now, all I have to say is that this is hard work. I've worked hard for a long time, and it's not about winning. But what it's about is not giving up. If you have a dream, fight for it. There's a discipline for passion, and it's not about how many times you get rejected or you fall down, or you're beaten. It's about how many times you stand up, and are brave, and you keep going."

Cooper and Gaga's duet on "Shallow" at the ceremony on Sunday night proved one of the major talking points of the 2019 show, due to the closeness of the pair. Meanwhile, composer Ludwig Goransson won the best original score Oscar for "Black Panther".

Goransson thanked director Ryan Coogler, recalling that 12 years ago, they were "sitting in our dorm at USC, writing the score for your first short film, and we're here 12 years later celebrating one of the most important cinematic moments in history". He thanked the African musicians who played on the score (including vocalist Baaba Maal) as well as the London orchestra.           —Mid-day