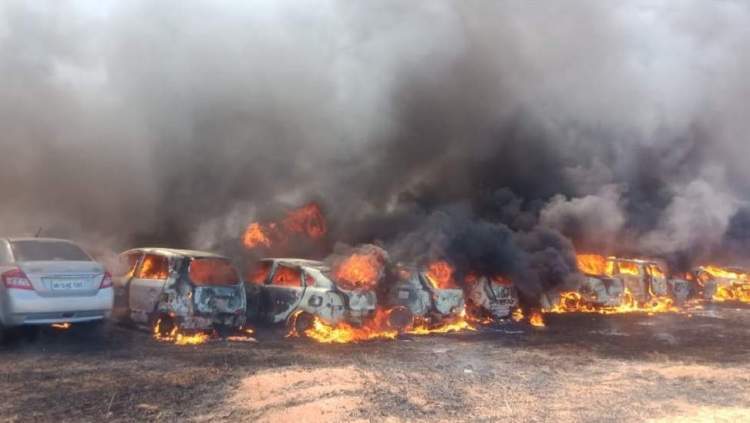 In a massive fire that broke out at a parking lot near the venue of the Aero India Show at Bengaluru, nearly 300 cars have been gutted.

Thick smoke could be seen billowing upwards from the car parking near the Yelahanka Air base where the aero show is underway in Bengaluru. It is not yet clear how the fire broke out.

The cars in the parking lot belonged to the people who had come to see the aero show.

The flight display at the show as temporarily halted. As many as 10 fire tenders were dispatched and they managed to bring the blaze under control quickly by creating gaps between cars by removing adjacent cars.

No planes are reported to have suffered any damage.

DGP Fire, MN Reddi tweeted, “Totally about 100 cars burnt in the fire. Fire spread is controlled by creating a gap by removing adjacent cars. Fire under control now. No injuries or any harm to people reported. Likely cause: dry grass fire aided by heavy winds.”

In a second tweet he wrote that nearly 300 cars had been gutted.

The fire comes barely four days after a fatal mid-air crash had left a pilot of the Surya Kiran aerobatics team dead. Two other pilots suffered injuries in the mid-air collision during the rehearsal for the Aero India show.

The aero show which began on Wednesday is scheduled to conclude on Sunday.