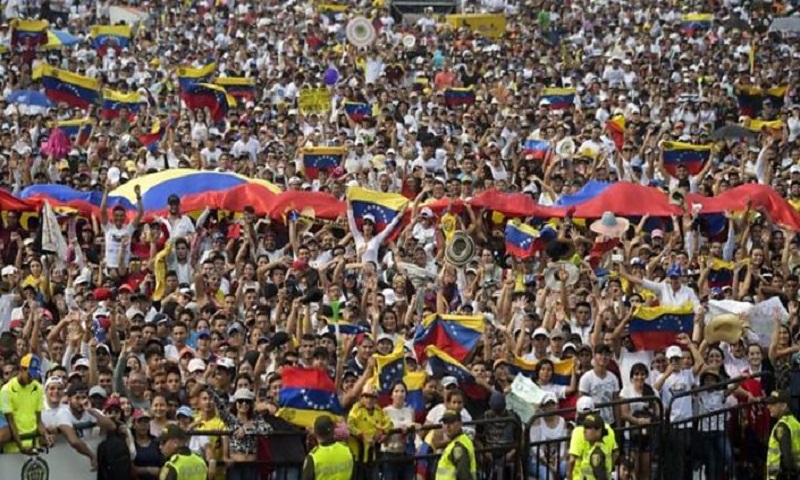 Venezuela has said that its border with Colombia has been partially closed, shortly after opposition leader Juan Guaidó defied a travel ban to cross it.

Vice President Delcy Rodriguez tweeted to say the "total, temporary closure" was due to serious threats against the country's sovereignty and security.

Tensions have been rising over a row about the delivery of humanitarian aid.

Two people were killed by Venezuelan security forces on Saturday near the border with Brazil.

The violence has been condemned by the White House, which reiterated in a statement that "the world is watching".

He has since won the backing of dozens of nations, including the United States.

He argues Mr Nicolas Maduro's rule is constitutionally illegitimate because his re-election in 2018 was flawed, and has vowed to oversee fresh elections.

What happened on Friday?

Hundreds of tonnes of humanitarian aid have become a flashpoint between Mr Guaidó and President Maduro.

President Maduro has so far refused to allow the stockpiles, including food and medicine, to cross over into Venezuela.

Mr Guaidó, who asked for its collection, has vowed that hundreds of thousands of volunteers will help bring it in on Saturday.

On Friday rival concerts were held over the issue just 300m (980ft) away from each other on either side of the Venezuelan-Colombia border.

He was greeted there by the presidents of Colombia, Chile and Paraguay - three of the nations who have recognised the 35-year-old lawmaker as interim president.

He alleged that he was able to cross over on Friday with the help of the Venezuelan armed forces. The claim is significant as President Nicolás Maduro has been able to retain power largely because of his military support.

Hours after his appearance, the announcement about the closure of bridges in Tachira state was made.