Shamima Begum in Syria: Where now for IS bride? 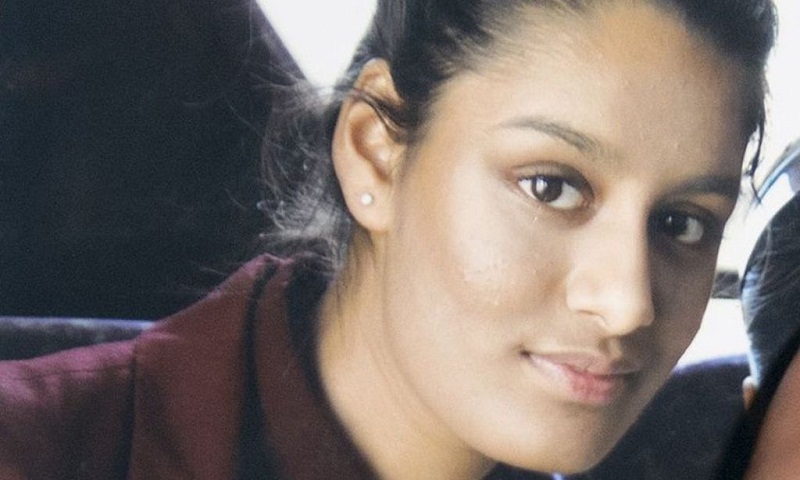 I saw her approach through the crowded camp and recognised her from her shoes.

They peeked out from underneath her black abaya; like a child's trainers they were red, blue and gold but almost in pieces. I'd spotted them when we first met two days earlier.

Shamima Begum took off her veil, and carefully sat down in the director's office, in the al-Hol internment camp in north-eastern Syria.

A tiny squeal came from under the stained, black dress. Her three-day-old son Jarrah was cradled underneath.

There had been an international search for her when, at 15 years old, she disappeared four years ago, along with two school friends from the Bethnal Green Academy in east London. She'd left to join the Islamic State group (IS).

And now the world wanted her to disappear again.

'I wanted to get married'

When asked, she professed ignorance of the jihadist group's worst crimes - the enslavement of the Yazidi people and the rest of the appalling crimes they committed in Iraq and Syria.

But she also justified some - claiming, in a twisted logic - that the bombing of the Ariana Grande concert at the Manchester Arena in 2017, which killed 22 people, many of them children, was no worse than Western air strikes here in Syria. The fact that one followed the other didn't seem to figure in her thinking.

On our second meeting, the public anger about her crime and her request to now come back to Britain, had sunk in. She was more apologetic. But by then it was too late. The UK home secretary had stripped her of her citizenship.

There are already more than a dozen British women and children in camps here, but none have captured public attention like her.

As a reporter I've interviewed many IS fighters, including the men accused of beheading the American journalist, James Foley, and British aid workers Alan Henning and David Haines.

There was outrage, but not on anything like the same scale as that directed at Shamima Begum. She isn't accused of murder, but her betrayal of Britain by committing the crime of joining a "proscribed terror group" stings deeply.

And there was anger, too, that we were giving her airtime, even though she was strongly challenged on her outrageous answers - including an attempt to justify the institutionalised rape of Yazidi women. Her lack of contrition - though she did express regret - was particularly galling.

British citizens played an outsized role in the IS group. Other European countries contributed more fighters but they didn't have Jihadi John. Mohammed Emwazzi, to give him his real name, horrified us, revelling in his murders and goading the West to come get him. He was killed eventually in a drone strike in Raqqa.

Shamima Begum liked those videos. Those horror films, and others promising an Islamic religious paradise, drew her to IS. How could she leave Britain - leave us - for that?

"I wanted to get married and my parents wouldn't let me," she responded.

If the public was ill-prepared for the 19-year-old's reappearance, then so too was the British government.

Until she's 21 she has the right to Bangladeshi citizenship. That was enough space - "a very limited loophole" as one diplomat described it to me - for her to be declared no longer British; no longer Britain's problem.

As I sit here in Deir al-Zour province in south-eastern Syria, the caliphate she joined willingly is dying. Thirty trucks just left the tiny strip of land they hold in the tiny village of Baghuz, full of IS supporters and others. Earlier in the week, more than 2,000 people were evacuated from the area.

They haven't been processed yet, but intelligence suggests that British women will be among them. British fighters too are still inside - will they die in the last battle or will they surrender? And if they survive, will there be more "very limited loopholes" to stop them from returning to Britain too?

Russia, Kazakhstan and the United States have taken back women from areas under IS control. European countries have not. Iraq and Tunisia have taken back IS fighters; Britain, like many others, has not.

There are risks in letting these people become someone else's problem. The Syrian Kurds holding them say there should be international tribunals here in Syria. After all, it's where they did the most harm. But with US forces leaving, will the detained suspects and their family members be secure?

And there is the risk that in Syria's ever-changing alliances, the Kurds could hand them over to the regime. Let's not forget that President Bashar al-Assad was once happy to funnel foreign and local extremists into Iraq to attack Western forces there. He can't be trusted with Western prisoners.

Shamima Begum may disappear from public view soon (to where, I don't know - Bangladesh, says it doesn't want her either).

At the end of our second interview, she slowly rose from the chair and, replacing her veil, left to feed her child.

I watched the black figure with tattered shoes disappear into the teeming camp. Many others have followed in her footsteps from Britain, to Syria, and the Islamic State group. And we still don't know where they will end up either.