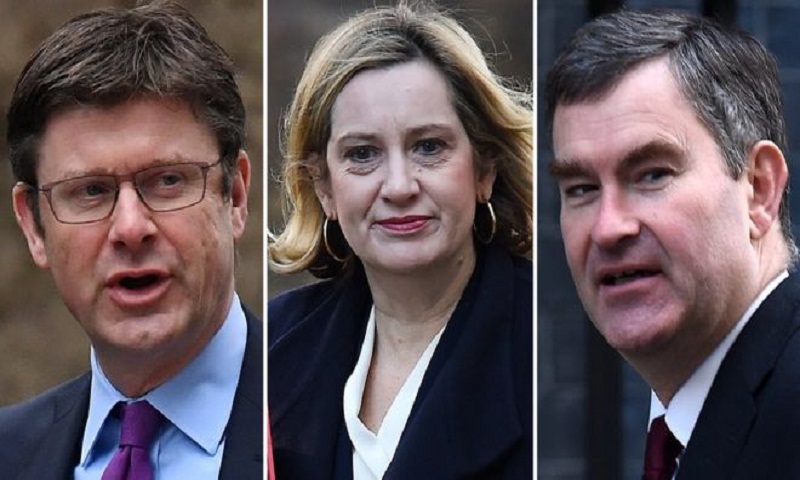 Brexit should be delayed if Parliament does not approve a deal in the coming days, three cabinet ministers have warned publicly for the first time.

Ahead of crucial votes in the Commons, Greg Clark, Amber Rudd and David Gauke told the Daily Mail time was running out and that they hoped for a breakthrough in negotiations soon.

If not, they said they are prepared to defy Theresa May and vote for a delay.

Downing Street said the trio's views on no deal were "scarcely a secret".

Number 10 said in a statement: "The PM is working hard to ensure we get a deal with the EU that allows us to deliver on the result of the referendum.

"That is where the cabinet's energy should be focused."

Earlier, Mrs May's spokeswoman said the PM would have another "period of engagement" on Brexit at an EU-League of Arab States summit in Sharm el-Sheikh, Egypt - including a meeting with European Council president Donald Tusk.

The UK remains on course to leave the European Union on 29 March.

But the government has repeatedly refused to rule out the possibility of the UK leaving without a formal deal, in the event that Mrs May cannot get MPs to approve the deal she negotiated with Brussels in time.

MPs are due to debate Brexit again next Wednesday and are expected to consider an amendment tabled by former Tory minister Sir Oliver Letwin and Labour's Yvette Cooper to give Parliament the opportunity to delay Brexit and prevent a no-deal situation if there is no agreement with the EU by the middle of March.

Mr Clark, Ms Rudd and Mr Gauke argue if a deal is not endorsed by MPs imminently "it would be better to seek to extend Article 50 and delay our date of departure rather than crash out of the European Union on March 29".

Mr Clark, the business secretary, along with Ms Rudd, the work and pensions secretary, and the justice secretary, Mr Gauke, said there had been "months of uncertainty".

They wrote: "It is time that MPs recognised the need to get a deal, accepted that this is the only deal on offer, and supported it."

But they also warned Brexiteers in the European Research Group (ERG) that Parliament will block the UK leaving without a deal, stating that if there is a delay "they will have no-one to blame but themselves".

They said: "Beyond the next few days, there simply will not be time to agree a deal and complete all the necessary legislation before March 29."

Their article comes after the BBC was told dozens of normally loyal Conservatives could back plans to stop the UK leaving the EU without a deal if a reworked version of Mrs May's plan does not pass.

Mark Francois, Tory MP and vice chairman of the ERG, told the BBC that "the prime minister will want to know why three members of her cabinet have decided to publicly decry government policy" and added that he thought it was "interesting that the chancellor has not signed the letter".

Speaking on Radio 4's The World Tonight, he said he thought Ms Rudd, Mr Clark and Mr Gauke had been leaking information for weeks and that "their point of view is not sensational news".

He told the Evening Standard he was warming to the idea of MPs backing a Commons amendment which would approve the Brexit deal, but only if it was put to the public in another vote.