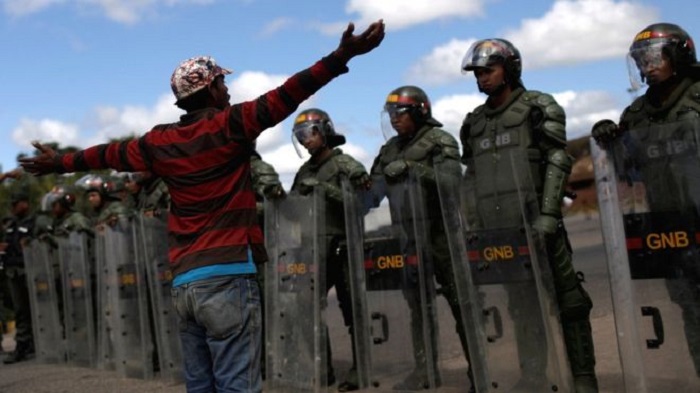 Venezuelan soldiers shot and killed two people and wounded 15 others on Friday when they tried to prevent the troops from sealing an unofficial crossing point on the Brazilian border, a human rights group said.

"An indigenous woman and her husband were killed and at least 15 other members of the Pemon indigenous community were injured," said the group, Kape Kape.

The clash occurred in southeastern Bolivar state close to the border with Brazil, which President Nicolas Maduro ordered closed on Thursday.

"We crossed the border from Venezuela to Brazil via other paths because the national guards closed the border," said Genesis Valencia, a 26-year-old Pemon woman.

"That's why we had to come through other paths. We came to buy things here in Brazil because there's nothing in Venezuela...no food, no medicine...people, kids, are dying of hunger."

Maduro, who has blocked the delivery of stockpiled humanitarian aid in a tense standoff with his rival Juan Guaido -- recognized as interim leader by more than 50 countries -- on Thursday ordered the border with Brazil "completely and absolutely" closed until further notice.