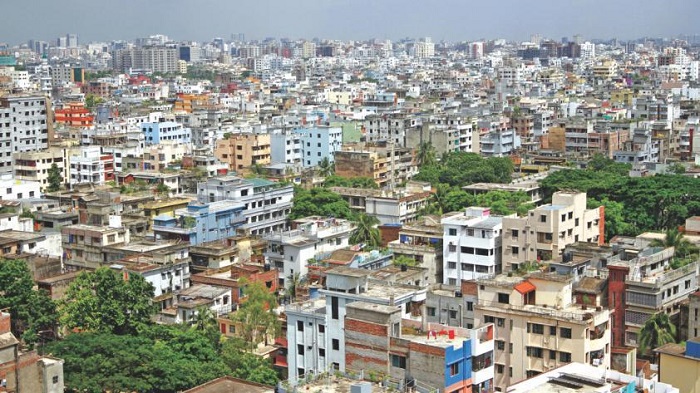 Most of the buildings in Dhaka city are lacking in fire exits – a much-needed special doorway used when there is a fire or any emergency to save lives.

Sources said the fire escape options remain in the original design of the buildings, but are hardly followed when the construction gets underway.

Earlier, a report of Brac Institute of Governance and Development said around 95 percent of the buildings in Dhaka do not have any fire exit.

The city buildings that have fire exits, however, do not have any signs to direct people towards the exit, added the report.

The issue of fire escape route during the building design and construction has draw the attention of all after the massive inferno in Chawkbazar on Wednesday that killed at least 78 people and injured many more.

According to experts, all modern architectural developments everywhere in the world follow the national building code that includes fire escape route in the design.

As per the Bangladesh National Building Code, fire exit route must be designed in such a way that it is unobstructed and protected against smoke and heat with fire-rated doors, fitted with mechanical ventilation, connected directly with the road outside the buildings for easy access and exit.

But the building code remains in paper only, and thus high-rises are built without considering the fire escape option, according to sources.

The Brack study report also observed that in addition to lack of preparedness, fire hazards are likely to become more extreme in the capital’s residential areas due to the high density of buildings, narrow roads, flammable building materials, old water and electrical supply systems, and the prevalence of chemical factories.

“All new modern architectural designs include fire escapes. The design, however, gets changed through different authorities. The city buildings do not have fire escape options, and there is also lack of water resources around the infrastructure,” Prof Azizul Mowla told daily sun on Friday.

The academic of architecture also suggested introducing modern fire safety equipment to the city buildings that are lacking in fire escape options in their old designs.

“The owners have to concentrate on the renovation of interior of the structures as soon as possible.”

The Department of Architecture and the Department of Civil Engineering have jointly proposed forming an independent institute to provide post-diploma degree to graduates and also trainings to professionals to create skilled human resources to reduce fire incidents in the industries.

“Several workshops and seminars were organised in joint initiative. We made the proposal, but it is yet to be implemented,” Prof Azizul added.