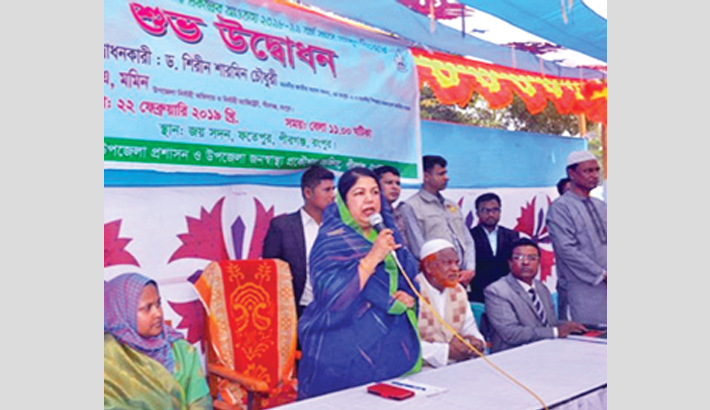 “Dr Wazed is the name of a proud and enlightened man of the Bengali nation,” she said this while inaugurating distribution of tube-wells under the priority basis water supply project at a function as the chief guest.

The Upazila Department of Public Health Engineering (DPHE) organised the function on Joy Sadan premises at village Fatehpur Laldighee in Pirganj upazila of the district.

Earlier, Dr Shirin placed wreaths at the grave of Dr Wazed at his birthplace village of Fatehpur Laldighee, offered Fateha and special munajats there seeking eternal peace for the departed soul of Dr Wazed and the deceased people of Chawkbazar fire incident.

The Speaker said Dr Wazed significantly contributed to looking after family members of Father of the Nation Bangabandhu Sheikh Mujibur Rahman during the post 1975 period, preservation and spread of ideals of Bangabandhu and spirit of the War of Liberation.

Dr Shirin laid emphasis on frequently organising science fairs and taking innovative programmes to introduce students of the present generations with the life and works of Dr MA Wazed Miah.

“Sajeeb Wazed Joy, the able successor of Dr MA Wazed Miah and Prime Minister Sheikh Hasina, is one of the artisans to build a Digital Bangladesh.  Joy is contributing to the formation of information technology based modern Bangladesh,” she said.

The Speaker said safe and pure drinking water is very important for life.