Awami League must repay people for their trust, says Hasina 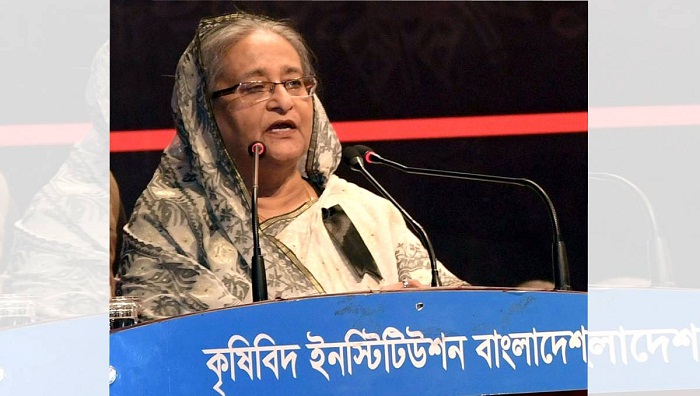 Prime Minister Sheikh Hasina on Friday said Awami League will have to repay the trust and confidence the people placed in it through continuing the development spree in the country and advancing it further.

"We’ve attained the confidence and trust of people. We’ve to repay the dignity of that trust. The development spree that has started has to be continued. We’ve to advance Bangladesh," she said.

The Prime Minister was addressing a discussion at the Krishibid Institution, Bangladesh auditorium in the city.

Awami League organised the discussion on the occasion of Amar Ekushey and the International Mother Language Day.

After the 2008 election, the Prime Minister said, the country, which plunged into an era of darkness after the assassination of Father of the Nation Bangabandhu Sheikh Mujibur Rahman, started its journey towards the path of light.

"No one can put any barricade to that journey, no one will be able to stop that. We’ll build the country as Golden Bangladesh as dreamt by the Father of Nation. All have to step forward after taking preparations," she said.

Sheikh Hasina, also the chief of the ruling party, said Bangladesh will be free from hunger which was the dream of Bangabandhu. "And that’s our aim."

As the Awami League government in power for over 10 years consecutively, the development of the country is now visible, she said, adding that Bangladesh has achieved a dignified position among the people of the world.

"Bangladesh is now termed the role model of development. We’ve eradicated hunger from the country. We’re uprooting poverty from the country and it’ll be uprooted completely.

Earlier, a one-minute silence was observed as a mark of profound respect to the memory of the language heroes who laid down their lives on February 21 in 1952 for establishing Bangla as the state language, made the supreme sacrifice for independent Bangladesh, martyrs of the August 15, 1975 carnage and the victims of the devastating Chawkbazar fire.