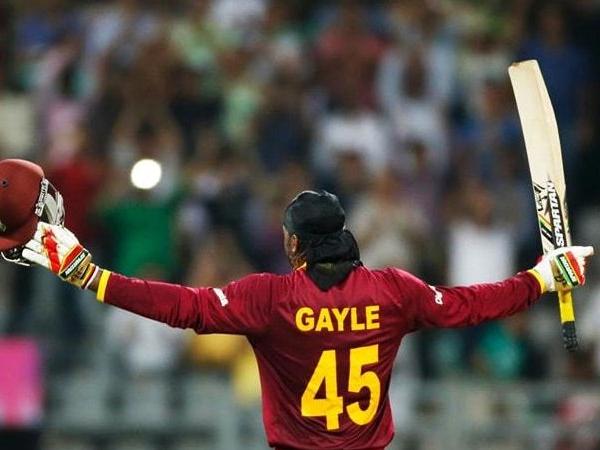 Chris Gayle’s 24th one-day international century anchored the West Indies to a formidable total of 360 for eight batting first against England in the day/night first fixture of a five-match series at Kensington Oval in Barbados on Wednesday.

Playing his first ODI since the home series against Bangladesh last July and having announced that the upcoming World Cup will be his international farewell in the format, the big-hitting left-hander signalled his intentions for a lengthy grand finale with an innings of 135 off 129 balls with 12 sixes and three fours.

His tally of maximums dominated an innings in which 23 sixes were struck, a new record for an ODI innings as Ashley Nurse heaved Adil Rashid beyond the boundary off the final ball of the innings to eclipse the previous standard.

Despite conceding 34 runs off his final two overs, leg-spinner Rashid played an important role together with all-rounder Ben Stokes in limiting the West Indies progress over the final 15 overs. Stokes returned the best figures of three for 37, including the important wicket of Gayle in the 47th over, dragging a full-length delivery onto his stumps.

Rashid claimed three for 74, making important breakthroughs at the other end when the West Indies needed to press on the accelerator.

England, who lost the preceding Test series 2-1 in a surprise turnaround for the home side, paid dearly for Jason Roy dropping Gayle at point off seamer Liam Plunkett when the former West Indies captain was just on nine.

However the top-ranked ODI team, who will go into the World Cup as one of the favourites to lift the coveted title, fought back well over the final ten overs when it looked as if the home side would get closer to the 400-run mark with Gayle in full flow.

A typically ponderous start by the 39-year-old after West Indies captain Jason Holder chose to bat first saw the early spotlight being taken by John Campbell, who marked his ODI debut with a breezy innings of 30 before falling to Chris Woakes.

Shai Hope and Gayle then featured in a 131-run partnership for the second wicket with Hope looking particularly impressive with the variety of his strokeplay while Gayle was content with occasionally heaving towards the boundary ropes.

Stokes eventually got the breakthrough when Hope, on 64, got a leading edge to third man. While the innings went through a bit of a stutter with the dismissals in quick succession of Shimron Hetmyer and the other West Indies debutant, Nicholas Pooran, it was left to Darren Bravo, demoted down the order to accommodate the big-hitters, to regain momentum with 40 off 30 balls.

Holder and Nurse ensured the West Indies total would be competitive, although in such ideal batting conditions England would be fancying their chances of chasing down the target, especially as the West Indies team is without experienced fast bowler Kemar Roach, who was ruled out before the start of play with a back injury.