Rescue operation called off; 41 identified, 38 bodies handed over to families 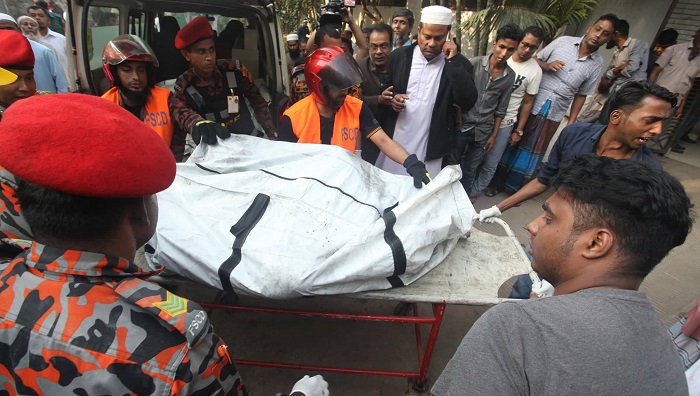 A total of 78 people were killed and around 41 others injured in a devastating fire that broke out at a chemical warehouse and raged through four other adjacent buildings in the city’s Chawkbazar area on Wednesday night.

Among the victims 41 bodies were identified and out of them 38 bodies were handed over to their relatives till filing of this report around 10pm, hospital sources told.

According to media report, 14 bodies had already been buried at Azimpur graveyard till 11:45pm on Thursday night.

However, the authorities have dug 70 graves at the burial ground in Dhaka’s Azimpur and other 15 graves at Jurain for those killed in a fire at Chawkbazar.

Earlier, Major AKM Shakil Newaz, Director (Operation and Maintenance) of Fire Service and Civil Defence, at a press briefing on the spot in the morning told reporters that a total of 70 bodies were recovered from the buildings.

Besides, duty officer at the Fire Service control room Rasel Shikder told UNB around 4:15pm that 11 others succumbed to their injuries at the DMCH.

Shakil Newaz said 41 people were rescued alive while the flame was doused at 6:30am. A total of 39 units of firefighters took part in extinguishing the fire.

Two helicopters of Bangladesh Air Force sprayed water and chemical from the sky to help douse the flame and keep the atmosphere of the area cool, said Rasel.

The rescue operation was called off at 12:22pm, Rasel said, adding that two units of firefighters, however, remained deployed there.

Mahfuz Rivan, a control room duty officer, all the bodies were sent to the DMCH for autopsy.

He said 16 injured people were admitted to the hospital while 21 others received primary treatment.

Meanwhile, a heart-wrenching scene was enacted outside the DMCH morgue throughout Thursday, with the wailing of the near and dear ones of those killed in the horrific fire incident in Old Dhaka.

People who survived the fire but had family members missing started thronging the morgue since morning.

Selim Reza also said the government is providing Tk 20,000 for the burial of each deceased.

The reason behind the fire will be clear after investigation, said Shakil Newaz.

However, Industries Minister Nurul Majid Mahmud Humayun on Thursday said the Chawkbazar fire that claimed the lives of at least 67 people originated from a gas cylinder blast.

He made the claim while talking to reporters at Dhaka Medical College Hospital (DMCH) after visiting those injured in the fire incident.

The minister said Wahed Mansion, a four-storey building which caught the fire first, housed a hotel while there was a vehicle with gas cylinders for delivering those to households. “The explosion took place from any of them.”

Meanwhile, a three-member body has been formed to investigate the incident which was asked to submit its report within seven working days, Shakil Newaz said.

The Industries Ministries also constituted a 12-member committee with Additional Industries Secretary M Mofizul Haque as its convener to find out the reason behind the inferno, assess the extent of loss and place recommendations to prevent the reoccurrence of such incident in future.

The committee was asked to submit its report within five working days.

Duty officer at the Fire Service Central Control Room Ziaur Rahman on Wednesday night said the fire originated at the chemical warehouse on the ground floor of a four-storey building at Churihaat around 10:38pm.

Later, it spread to four other buildings fast.

Sources at the Fire Service and Civil Defence headquarters said 37 firefighting units brought the fire under control around 2:55am on Thursday.

Contacted, Deputy Director (Operations and Maintenance) of FSCD headquarters Dilip Kumar told UNB around 7:23 am that the fire was brought under control around 2:55am and it needed more time to douse the flame as it engulfed four more buildings.

Visiting the spot our Keraniganj correspondent reports: The fire broke out at Wahed Mansion, a four-story building that also housed a market and a chemical warehouse.

Around 80 people of 40 families lived on the 3rd and 4th floors of the building, said locals.

The blaze flipped through a six-storey building, a restaurant a community centre and another building very rapidly.

Chawkbazar thana police said they have prepared a list of 16 people who have remained missing since the fire incident.

The Ministry of Labour and Employment will provide Tk 1 lakh to the families of each deceased and Tk 50,000 to the injured victims for their treatment, information officer of the ministry Akhtarul Islam told.

Road Transport and Bridges Minister Obaidul Quader said the government will provide compensation to the fire victims and take steps for the rehabilitation of their families. "We've taken lessons from this incident and necessary measures will be taken to avoid recurrence of such incident," he said while talking to reporters during his visit to Chawkbazar.

Home Minister Asaduzzaman Khan said following the Nimtali fire tragedy, all the chemical godowns and factories were removed from the area but a section of businessmen again established their businesses at the same place.

Although the Dhaka South City Corporation (DSCC) authorities stopped giving licence to run business in the area, a section of businessmen are running their businesses here, he said adding that the mayor will take necessary steps in this regard.

The President also urged all to stand beside the families of those killed and injured in the fire incident, said his press secretary Joynal Abedin.

The Prime Minister ordered the authorities concerned to provide proper treatment to the injured people and necessary support to the families of those killed in the fire incident, PM’s press secretary Ihsanul Karim.

She conveyed deep sympathy to the bereaved family members and prayed for eternal peace of the departed soul.

Ershad urged the government to launch an investigation into the incident and upgrade the fire extinguishing system after properly evaluating its current capacity.