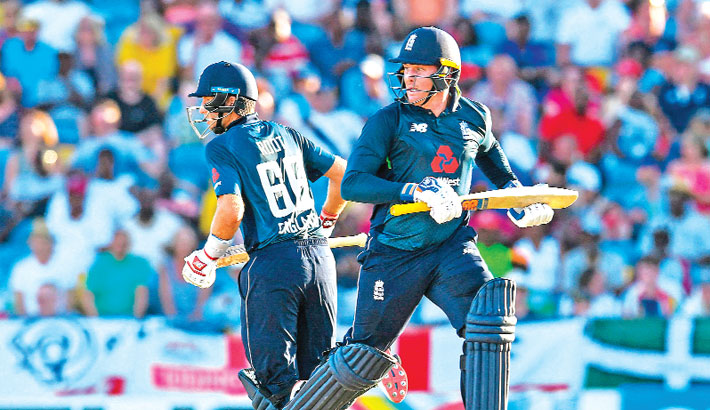 England batsmen Jason Roy, right, and Joe Root run between the wicket during their first ODI of the series against West Indies at Kensington Oval on Thursday. England won by 6 wickets. — AFP PHOTO

Contrasting centuries by Jason Roy and Joe Root paced England to a comfortable six-wicket victory over the West Indies with their record one-day international run chase in a high-scoring opening game of a five-match series in Barbados on Wednesday.

Set what looked a daunting target after Chris Gayle’s 24th ODI hundred anchored the home side to 360-8, Roy blazed 123 off 85 balls at the top of the order while Root cruised to a comparatively sedate 102 off 97 deliveries to take help the tourists reach their target with eight balls to spare.

In achieving the highest-ever ODI run chase in the Caribbean and the third-highest overall, England underlined their status as the top-ranked team in this format of the game and will be brimful of batting confidence heading into the second match at the same venue on Friday.

Fresh from a hundred in the lone warm-up match at the weekend, Roy was at his most ruthless against the hosts who missed key fast bowler Kemar Roach.

The ‘man of the series’ with 18 wickets as the West Indies surprised England 2-1 to reclaim the Wisden Trophy in the preceding Test duel, Roach has been ruled out of the entire ODI series due to early signs of what could develop into a stress fracture of the lower back.

Roy set the pace in racing to a hundred off just 65 balls — the fastest-ever in ODIs in the Caribbean — and dominated an opening stand of 91 with Jonny Bairstow.

He maintained the charge through a 114-run second-wicket partnership with Root and by the time he fell in the 27th over to leg-spinner Devendra Bishoo, England were well on course.

Root, the Test captain who finally came good with a hundred in the last innings of the three-match series in St Lucia just over a week earlier, also got to three figures against the University of the West Indies Vice-Chancellor’s XI last Sunday and tapped into that rich vein of form once more.