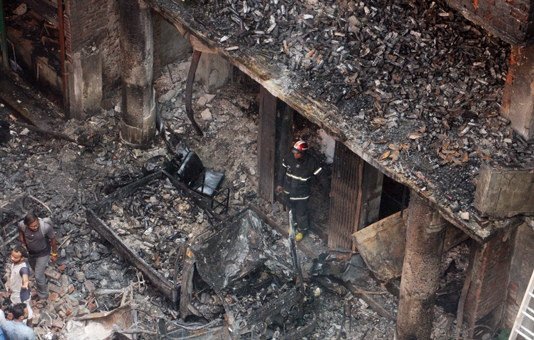 The Chawakbazar fire that overnight claimed 81 lives amid fears of rising toll appeared to be the repetition of the 2010 Nimtali tragedy that had killed over 120 people while chemical warehouses in crammed neighbourhoods emerged as the culprit in both the cases.

In June 2010, more than 120 people were burnt to death and 50 others injured in an identical manner at Nimtoli of the crowded Old Dhaka and it was a plastic factory responsible for quick spread of fire.

The incident at that time sparked a public outcry, demanding the relocation of chemical warehouses and stores packed with combustible materials from the area and steps too were ordered towards that end.

But the last night’s incident clearly suggests that the measure were not enough to clean a area where people use their houses for business purposes of such ignitable items for years.

According to the fire service, the fire started around 10.45pm at a four-storey building owned by Wahid Chairman and it spread to four nearby buildings quickly.

The ground floor of the building is rented out to shops and second floor is used as a warehouse for toiletries and various plastic products. The top two floors are residential units.

There were also several gas cylinders on the road in front of adjacent restaurants which helped spread the deadly fire with intensified wraths while residents in the area suspected the fire broke out when a gas cylinder exploded at a restaurant.

Fire service officials, however, are yet to confirm the origin of the fire but they blamed the presence of flammable materials for the quick spread of the blaze.

The fire spread from the second floor of building owned by one Wahid Chairman and ripped through the area quickly and there were sounds of several small explosions from inside.

Fire fighters from 37 units rushed to the spot quickly but the narrow lanes exposed their fire engines reach the scene forcing them to use long hose pipes while the air force lent its hands sending helicopters which poured waters on the fire from the skylines.

A BSS newsman found many plastic containers of perfume, air fresheners and other burnt materials during a visit to the scene this morning.

The fire first spread to two neighbouring buildings and then spread across the narrow lane to two other buildings in the crowded area, said Abdur Rahman who was among hundreds of people rushed to sport from nearby areas to see the incident.

“The fire spread quickly because of flammable materials on the second floor . . . engulfing nearby buildings and increasing the number of casualties,” said fire fighter Rafiqul Islam.

He said most of the bodies were retrieved from the buildings and the casualty came despite hundreds of people fled their homes or were evacuated.

Several people, however, were injured after jumping off the four-storey building that housed several families.