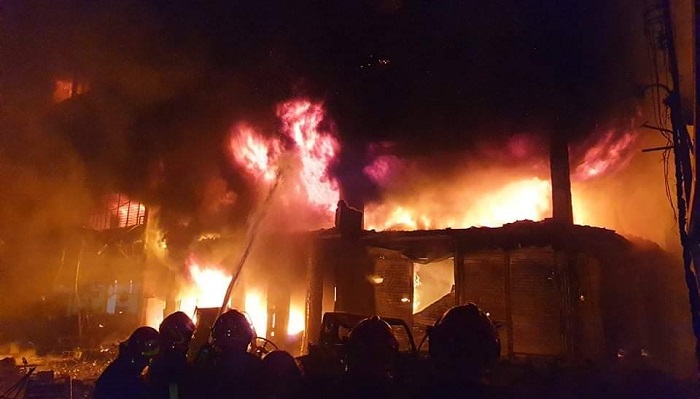 A devastating fire breaks out at a chemical warehouse in old Dhaka's Chawkbazar area. Photo by Reaz, daily sun

A devastating fire has broken out at a chemical warehouse in the old Dhaka city which left over fifty people hurt including burn injuries on Wednesday night, media reports.

The fire caught the chemical godown situated at the ground floor of a seven-storey building Wahed Mansion, behind the Shahi Mosque at Churihatta in Old Dhaka’s Chawkbazar around 10:30pm on Wednesday night.

Thirty seven units of fire service rushed to the site to douse the fire, Mahfuzul Haque Regan, an official at the Fire Service control room, told.

Locals said that about twenty families were resided in Wahed Mansion but no one could know what happened to them.

So far, ten persons admitted to the burning unit of DMCH, confirmed Hossain Imam, Head of burn unit. Among them one’s condition is critical as he bore 60 percent burn injury.

Residents of the neighbourhood said an electric transformer next to the building exploded after the fire had started.

The ground floor of the building housed some shops and the first floor was being used as a warehouse while some families lived on the other floors, a resident of the area said.