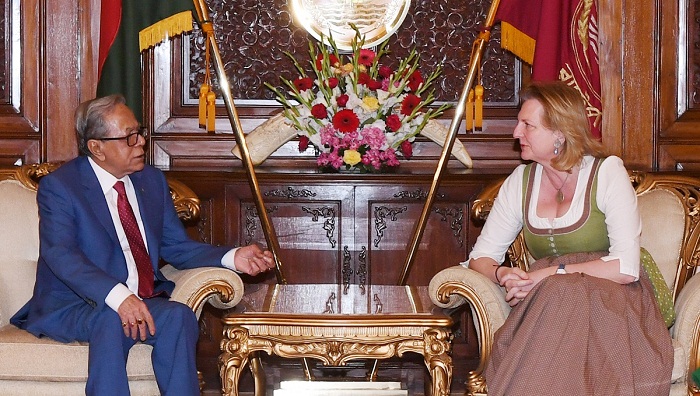 Welcoming the Austrian minister, the President recalled the moral support extended by the government and people of Austria to Bangladesh during the Liberation War in 1971.

He also mentioned that the then Austrian Chancellor Bruno Kreisky was honoured by Bangladesh with the ‘Friends of Liberation War Honour Award’ in 2012.

Austria was one of the first countries in Europe as well as in the world which recognised Bangladesh on February 4, 1972.

Hamid stated that there is a huge scope for expansion of the trade and investment volume between Bangladesh and Austria.

He also put importance to strengthening the relations between the two countries for the best use of this opportunity.

Expressing sincere thanks to the Austrian government for its support to Bangladesh over the Rohingya issue, the President stressed the importance of keeping Myanmar under pressure to ensure safe, orderly and sustainable return of the Rohingyas to their homeland.

He also sought Austria’s moral support to raise the voice in the international forums for the safe Rohingyas repartition.

The Austrian minister lauded the socio-economic development of Bangladesh, especially describing the development in the agriculture sector as exemplary.

During the visit of Bangladesh’s Civil Aviation and Tourism Minister to Austria in May 2017, the negotiation on air service agreement between the two countries was concluded.

Underscoring the importance of bilateral relations, the President hoped that formal signing of the Air Services Agreement will help gain further momentum in bolstering trade, investment, tourism and people-to-people contact through air connectivity between the countries.

Secretaries to the President were present during the meeting.