Prime Minister for protection, practice of own languages 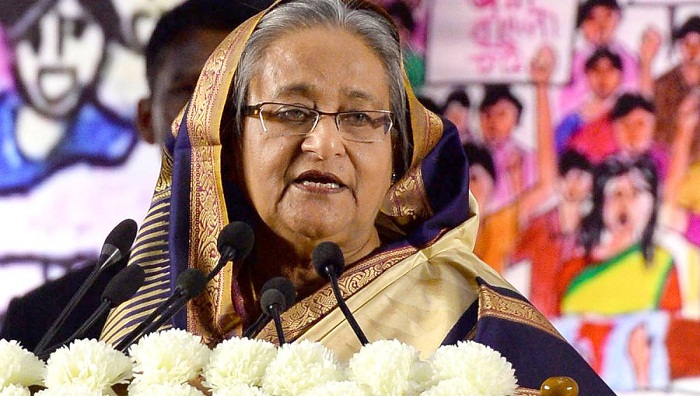 Prime Minister Sheikh Hasina on Wednesday stressed the importance of protection and practice of own languages and cultures for making a healthy environment for the future generation.

“It’s our duty to protect, exercise and take forward our independence, language rights and culture as well as create a decent environment for the next generation,” she said while addressing a function marking the distribution of Ekushey Padak-2019 in the city.

The Ministry of Cultural Affairs arranged the function at Bangabandhu International Conference Centre.

Urging all to come forward to buildthe motherland she said, “We wantthe next generation to have a decent lifeand enjoy the fruits of what we’ve achieved through our struggles.”

Noting that Bangladesh is marching forward and will continue to do so, she said the people of the country will move at the global stage keeping their head high as the Ekushey(Language Movement) has taught them not to bow down.

“Ekusheyhas taught us how to protect our own existence, mother tongue, culture and tradition as well as show respect to all this,” Hasina said.

She said her government’s goal is to take Bangladesh to a dignified position. “We’ve been working to accomplish that goal,” she added.

Talking about the contributions of Father of the Nation Bangabandhu Sheikh Mujibur Rahman to the Language Movement, she said it is unfortunate that once his contributions had been removed from history.

She said if people read the ‘Unfinished Memoirs’, the autobiography of the Father of the Nation, they could know how the Language Movement had started.

Sheikh Hasina, Bangabandhu’s eldest daughter, said they are publishing a book in 14 volumes over the 23 years’ secret documents of Pakistani Intelligence Branch (IB). The first two volumes of the book have already been published over the secret documents of 1948-’50 and 1951-’52 respectively, she said.

The Prime Minister said people will know the contributions of Bangabandhu to the Liberation War reading the secret documents.

Bangabandhu Memorial Trust is funding the publication of the book. Hakkani Publishers will publish the book in 14 volumes.

The Prime Minister said her government during its 1996-2001 regime started construction of the International Mother Language Institute in Dhaka, but the BNP-Jamaat government stopped the work coming to power in 2001.

Returning to power in 2009, the AL government completed the construction works on the Institute, she said.

Alongside taking measures for protecting the mother tongue, the institute is now continuing the process to study and collect the samples of languages of various small ethnic groups from home and abroad.

The Prime Minister distributed coveted Ekushey Padak-2019 among 21 eminent citizens for their contributions to their respective fields.