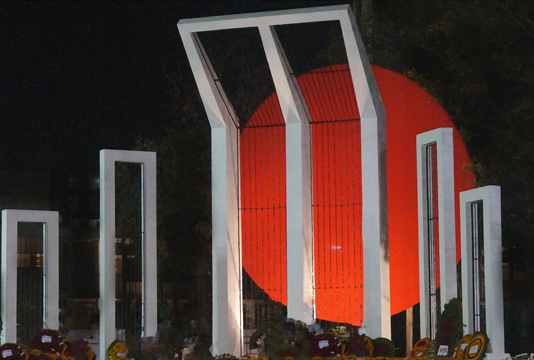 The nation is set to observer the ‘Shaheed Dibash’ (Language Martyrs Day) and the International Mother Language Day on Thursday  (February 21) through extensive programmes.

People from all walks of life will pay glowing tributes to memories of the language movement martyrs, the valiant sons of the soil who made supreme sacrifices to establish the rights of the mother tongue, Bangla, in 1952.

The day will also be observed around the world as the UNESCO recognized the Ekushey February as the International Mother Language Day on November 17, 1999.

President Abdul Hamid and Prime Minister Sheikh Hasina today issued separate messages on the eve of the day, paying glowing tributes to the martyrs of the historic Language Movement of 1952.

In his message, President Hamid said the aim of the language movement was to establish the right of mother tongue as well as to protect self-entity, culture and heritage.

Being a source of ceaseless inspiration, he said, Amar Ekushey (Immortal Shaheed Day) inspired and encouraged Bangalees to a great extent to achieve the right to self-determination and struggle for freedom and war of liberation.

“With the bloodshed passages of Language Movement, we achieved the recognition of Bangla as our mother tongue and consequently we attained our long cherished independence under the charismatic leadership of the greatest Bangali of all time, Father of the Nation Bangabandhu Sheikh Mujibur Rahman in 1971,” the President said.

Prime Minister Sheikh Hasina in her messages said holding the spirit of Ekushey and the war of liberation, her government achieved huge progress in every sector, including macro-economy, agriculture, education, health, communication, information technology, infrastructure, power, rural development, diplomatic success and cooperation during the last 10 years. “Bangladesh is now a ‘Role Model’ for development in the world.”

She said the people made Bangladesh Awami League victorious in the recent 11th parliamentary elections. “We will fully honour the huge mandate that the people of our country have given us. We will turn Bangladesh into a middle income country by 2021 and a developed one by 2041, InshaAllah.

“Let us build a hunger-poverty-free and happy-prosperous Sonar Bangladesh as dreamt by the Father of the Nation being imbued with the spirit of the great Ekushey,” the Prime Minister said.

On the occasion of great ‘Shaheed Day (Language Martyrs Day) and the International Mother Language Day, President Abdul Hamid and Prime Minister Sheikh Hasina extended their warm congratulations and sincere felicitations to all multilingual people of the world along with Bangla-speaking people.

The government has already taken extensive programmes to observe the ‘Shaheed Dibash’ and the International Mother Language Day tomorrow in a befitting manner.

The day is a public holiday. On the day, in respect to the martyrs of the historic Language Movement, the national flag will be hoisted half-mast in all educational institutions, government, semi-government and autonomous offices and private buildings across the country.

In observance of the day, the Central Shaheed Minar premises has been redecorated with paintings, graffiti, buntings and selected verses on the mother language as the nation awaits the clock to strike one- minute past zero hours (midnight) tonight to start paying homage to the martyrs of the Language Movement.

Tight security has already been enforced around the main altar of the Shaheed Minar, its adjoining areas and the Azimpur graveyard of the language martyrs as streams of people are set to pour into these places to lay wreaths to express their heart-felt respect to the language martyrs.

President Abdul Hamid and Prime Minister Sheikh Hasina will lead the nation in paying homage to the Language Movement heroes by placing wreaths at the Central Shaheed Minar at one minute past zero hours (midnight tonight).

Political leaders, Dhaka University teachers, diplomats and representatives of various organisations and general public as well will follow them in paying tributes to the 1952 heroes until the late morning tomorrow, singing the first four lines of the immortal song of the day, “Amar Bhaiyer Rakte Rangano Ekushey February, Ami Ki Bhulite Paari”.

Later, the Shaheed Minar would remain open to the public when thousands of people from all walks of life walked barefoot to it, with flowers in hands and humming “Amar Bhaiyer Rokte Rangano Ekushey February” to recall the supreme sacrifice of the language heroes.

Different political-social-cultural-professional organisations have chalked out various programmes, including seminars and cultural functions, to observe the Amar (immortal) Ekushey and International Mother Language Day in a befitting manner.

In line with the national programmes, all educational institutions, all local government institutions, city corporations, district and upazila administrations and Bangladesh missions abroad have already taken measures to observe the day in a befitting manner.

In observance of the day, ruling Awami League has taken a two-day programme. The programmes include placing of wreaths at the central Shaheed Minar at one-minute past zero hours tonight, hoisting at half-mast the national and party flags at its offices across the country and Bangabandhu Bhaban and hoisting of black flag in the morning, wearing black badges and

placing wreaths on the graves of martyrs at Azimpur graveyard with Provat Feri as a mark of respect to the Language Movement martyrs.

The party will organize a discussion at Krishibid Institution auditorium in the city at 3 pm on February 22 with its President and Prime Minister Sheikh Hasina in the chair.

Like previous years, Dhaka University (DU) authorities organised the programmes at the Central Shaheed Minar in coordination with other relevant agencies.

DU authority has also chalked out a series of programmes, including bringing out a Provat Feri (Dawn March) led by DU Vice-Chancellor Dr Md Akhtaruzzaman at 6.30 am, offering Fateha and arranging special prayer for the martyrs at all the mosques and places of worship on the campus.

On February 21 in 1952, Salam, Rafique, Shafique, Jabbar and Barkat embraced martyrdom in police firing in front of the Dhaka Medical College and Hospital (DMCH) as they took to the street to intensify the campaign to establish Bangla as the state language of the then Pakistan, sowing the seeds of subsequent movements for the country’s independence.

They were killed as police opened fire on students, demonstrating under the All-Party Students Action Committee against conspiracies of Pakistani rulers to declare “Urdu” as the only state language.

The movement for Bangla, however, did not stop and Pakistan government on February 29, 1956 was compelled to recognise Bangla as one of the state languages besides Urdu.

The decision, however, could not stop the movement against repression and misrule of Pakistani government and subsequently led to the War of Independence and ultimately the emergence of Bangladesh.