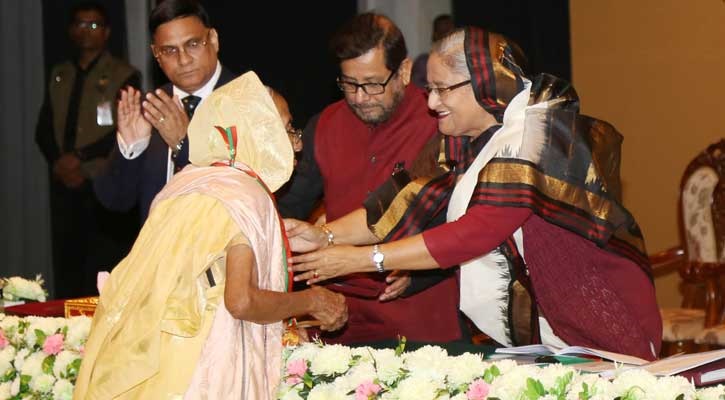 Prime Minister Sheikh Hasina has conferred the prestigious ‘Ekushey Padak-2019’ to the recipients for their outstanding contributions to their respective fields on Wednesday.

21 eminent persons selected for the second highest civilian award of the country this year.

The premier distributed the Ekushey Padak at a ceremony at the Bangabandhu International Conference Centre on this afternoon.

Acting Secretary of the ministry Dr Abu Hena Mostafa Kamal delivered the welcome address, while Cabinet Secretary Mohammad Shafiul Alam conducted the award-giving part of the function and read out the citations of the awardees.

The Cultural Affairs Ministry announced the names of the recipients on February 6.

The ‘Ekushey Award’ has been introduced in memory of the martyrs of the Bengali Language Movement of 1952.

The award is given to recognize contributions to a number of fields, including culture, education, and economics.

Each recipient gets a gold medal, a certificate and a cheque for Taka 2 lakh.