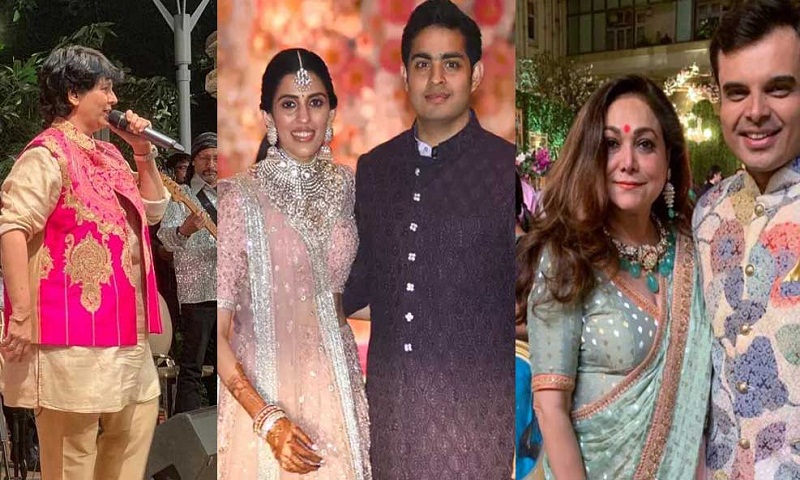 Just a few months after Beyonce flew to India to perform at Mukesh Ambani’s daughter Isha’s sangeet, another wedding in the Ambani household has caught the attention of people. Isha’s brother Akash Ambani is set to tie the knot with fiancé Shloka Mehta in a grand wedding that would stretch over a few days. Setting the events in motion, a musical night was organised at the Ambanis’ residence Antilia and had garba singer Falguni Pathak on stage, report Hindustan Times.

Dressed in her trademark kurta pyjama paired with a Nehru jacket, Falguni was her delightful best as she made the guests dance to her dandiya beats at the event. She was joined by singer Tushar Trivedi, who too was a dapper in a designer suit. The singer later shared pictures with the groom, his grandmother Kokilaben and aunt and Anil Ambani’s wife Tina Ambani.

Earlier, several Bollywood stars such as Shah Rukh Khan, Aamir Khan, Salman Khan, Aishwarya, Abhishek Bachchan had flown to Udaipur to attend Isha’s lavish sangeet. Shah Rukh had performed with wife Gauri Khan for the first time on stage at the event whereas there were dance performances by Aishwarya and Abhishek too. SRK had also shaken a leg with former US secretary of State Hillary Clinton and John Kerry at the event. were also a part of the grand sangeet.

This was followed by a Hindu wedding and multiple receptions in Mumbai that had the entire film fraternity in attendance. Amitabh Bachchan had delivered an emotional speech during Isha’s wedding ceremony and had also served food to her in-laws as part of a ritual.