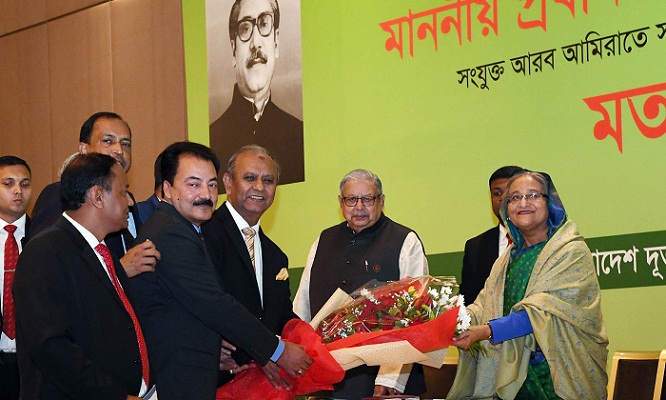 Prime Minister Sheikh Hasina on Tuesday said she will try her best to fulfill the hopes and aspirations of the people for which they have given vote in the last general elections.

The premier expressed her firm commitment while addressing a reception accorded to her by Bangladesh Embassy at Hotel St. Regis in Abu Dhabi this evening.

“Bangladesh is ours. So it’s our sacred duty to work together to build the country as a developed and prosperous one … our government would do whatever is necessary to build a peaceful country making it free from terrorism, militancy and drugs,” Sheikh Hasina said.

Sheikh Hasina, also the Awami League president, expressed her gratitude to the countrymen for reelecting her party, saying: “I will give my highest labour for making a Sonar Bangla as dreamt by Bangabandhu.”

The program began with playing of national anthems of the UAE and Bangladesh while Bangladesh Ambassador to the UAE Mohammad Imran conducted the function.

Sheikh Hasina said people particularly young generation and people of different professions have given vote spontaneously to Awami League in the last general elections as they understood that the country can progress only under the leadership of Awami League.

Urging the expatriates to abide by the UAE laws, the prime minister said her government will take steps to bring back about 700 Bangladeshis now languishing in UAE jails on different charges.

The prime minister called upon the expatriates to invest in Bangladesh send their hard-earned money to the country through legal banking channel in the country’s interests.

She assured the expatriates of ensuring proper utilization of every penny of their hard-earned money, urging them to invest in the Special Economic Zones being set up across the country for industrialization and creating job opportunities.

Terming her UAE visit as very fruitful and successful, Sheikh Hasina said Bangladesh’s relations with the Middle Eastern country founded during Bangabandhu’s visit to the UAE in 1974.

The UAE government as well as a number of leading business bodies has expressed their keen interest to invest in Bangladesh, she said, adding Bangladesh is now a very lucrative place for foreign investment.

During the visit, she said, Bangladesh has received huge response from UAE government to invest in Bangladesh in various sectors.

Pointing out the steps taken by her government for the welfare of the expatriates, the prime minister said Expatriates Welfare Bank has been established to help the people intending to go abroad with job. “For this purpose, they can take loan from the bank instead of selling their property,” she said.

Later, the prime minister joined a dinner hosted in her honour by the Bangladesh ambassador to the UAE.