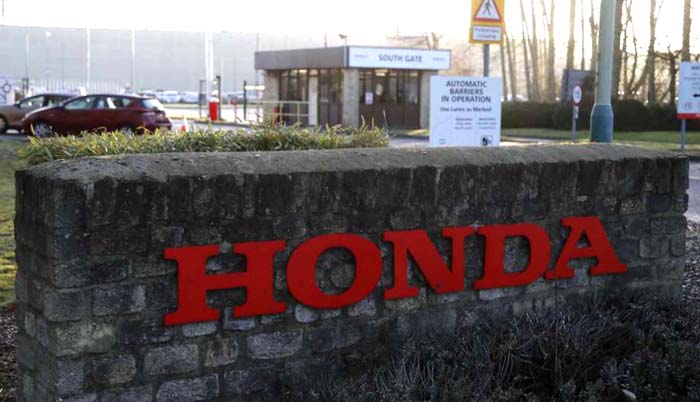 Honda will shut its UK plant with the loss of 3,500 jobs, the Japanese car maker announced Tuesday as the global auto industry faces "unprecedented changes" and the UK economy hits the skids on Brexit uncertainty.

The factory in Swindon, southwest England, which is Honda's only EU plant, will shut in 2021 "at the end of the current model's production lifecycle", the company said as carmakers worldwide increasingly invest in greener electric vehicles over diesel cars.

Business Secretary Greg Clark described Honda's decision as "devastating" and "a particularly bitter blow to the thousands of skilled and dedicated staff who work at the factory, their families and all of those employed in the supply chain".

Prime Minister Theresa May spoke to Honda's president to "express her disappointment at the decision," according to her Downing Street office.

The firm blamed "unprecedented changes in the global automotive industry" for the decision but it comes amid investment uncertainty in Britain ahead of the country's departure from the European Union next month.

Clark said that while Honda's decision was made for "commercial" reasons, it was nonetheless "devastating... for Swindon and the UK".

He added in a statement: "The automotive industry is undergoing a rapid transition to new technology. The UK is one of the leaders in the development of these technologies and so it is deeply disappointing that this decision has been taken now."

Speaking earlier in Tokyo, Honda president Takahiro Hachigo told reporters: "I'd like you to understand this is not related to Brexit."

Clark later told parliament that "we must accept" Honda's stated reasons, but added "the motor industry, Japanese investors and Honda in particular have been very clear for many months that Brexit is an additional worry at a difficult time."

Toyota, another Japanese car giant making vehicles in Britain, has meanwhile warned there would be no way to avoid a negative impact should the UK crash out of the EU without a deal.

The Bank of England earlier this month slashed its forecast for 2019 UK growth to 1.2 percent from 1.7 percent, blaming the downgrade on a global economic slowdown and "the fog of Brexit".

Regarding Honda's decision, the company "seems to have been preparing for this for a long time", Seiji Sugiura, analyst at Tokai Tokyo Research Institute, told AFP.

"Then Brexit happened, which might have pushed the company to make the decision now."

The carmaker's Swindon plant has been producing Honda's Civic model for more than 24 years, with 150,000 units rolling off the line annually.

The firm on Tuesday announced also that it would stop manufacturing the Civic model in Turkey in 2021.

She told AFP: "My ex-husband works there, has done for 20 years. He's going to be without a job, so I just think it's really, really bad news."

Local MP Justin Tomlinson tweeted that the decision had been made "based on global trends and not Brexit as all European market production will consolidate in Japan in 2021".

Britain's biggest union Unite said it would campaign to keep the plant open.

"We will leave no stone unturned to keep this plant going and its workforce in employment," said Des Quinn, Unite's national officer for the automotive sector.

"While Brexit is not mentioned by the company as a reason for the announcement, we believe that the uncertainty that the Tory government has created by its inept and rigid handling of the Brexit negotiations lurks in the background."