Two children die of Pneumonia every hour in Bangladesh: Report 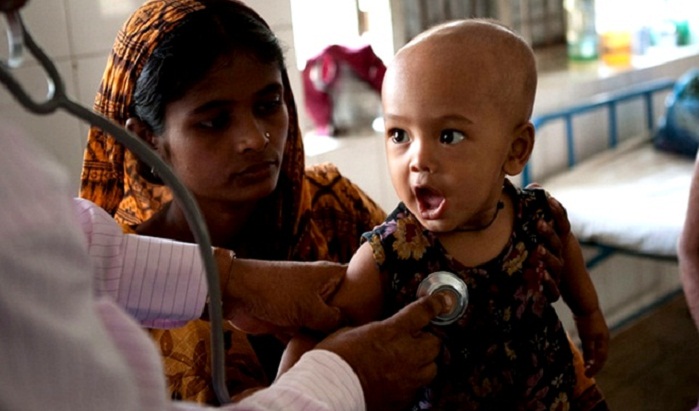 The burden of Pneumonia in Bangladesh is one of the leading killers of children under 5 years of age as the deadly disease took the lives of over 16,960 under-five children in 2016, which is close to two deaths every hour.

Although the overall child death (under 5) rate has declined steeply over the last 20 years, the reduction in pneumonia deaths has not had a similar result, according to a recent report published by Save the Children Bangladesh.

However, a recently released United Nations International Children's Emergency Fund (Unicef) data shows that only 42 percent of children under 5 with pneumonia symptoms receive care in Bangladesh.

Pneumonia claimed the lives of an estimated 880,000 children – more than for malaria and diarrhoea combined, approximately 16 percent of the 5.6 million under-five deaths in 2016 in the world. Most of them were less than two years’ old. The vast majority of those killed by pneumonia are poor and living in low and middle-income countries.

Bangladesh has a well-structured Integrated Management of Childhood Illnesses (IMCI) programme in the existing public healthcare delivery system and good immunisation coverage by introducing the PCV (Pneumococcal Conjugate Vaccine) which can help protect children against leading causes of pneumonia, said the report.

However, there is a gap in preparedness for IMCI service delivery, including availability of IMCI trained providers (54 percent), availability of medicine such as Amoxicillin DT, care-seeking behaviour of the community for pneumonia (46 percent), and some geographical inequalities in immunisation coverage.

Pneumonia, a form of acute respiratory infection that affects the lungs caused by some infectious agents - bacteria, viruses, fungi etc, is often said to be the “forgotten killer” of children under five, because historically, it has received very little attention despite its fatal role.

Almost all pneumonia deaths can be prevented through vaccination or early diagnosis and treatment with antibiotics. The major risk factors of pneumonia are malnutrition or undernourishment, especially in infants who are not exclusively breastfed; environmental factors such as indoor air pollution, preexisting illness such as symptomatic HIV infections and Measles.